Sjava and his pal Ruff ATM are at an outpost of progress, officially launching South Africa’s newest record label, 1020 Cartel.

It is unknown why the two friends elected to use 1020 Cartel as the name of the record label, however electing to own a recording company is a particularly symbolic move, especially for Sjava, who was once signed to Ambitiouz Entertainment.

Our record shows that at least two artistes who left Ambitiouz Entertainment had set up record labels of their own. Emtee is one, and the honcho at Emtee Records. Saudi is another. The “Fuck Ambitiouz” rapper runs “Ovloe Monopoly.”

Please follow the label on social media
To stay updated

However, as we recently reported, he has signed a contract with International record label, The Orchards, which might be the home of his imminent project, “Msotra Don’t Die.”

By the way, Sjava and Ruff are expected to release their first collaborative project, titled “iSambulo ,” on August 28 under 1020 Cartel. Translated from the Zulu, “iSambulo” means “The Revelation.” In a sense, it is, as the project will also unveil artistes signed to the label: Anzo, Yallunder, Nue Sam, and Mzukulu.

As Sjava said, they are excited about what is imminent. Are you? Check out the press release on the founding of 1020 cartel below: 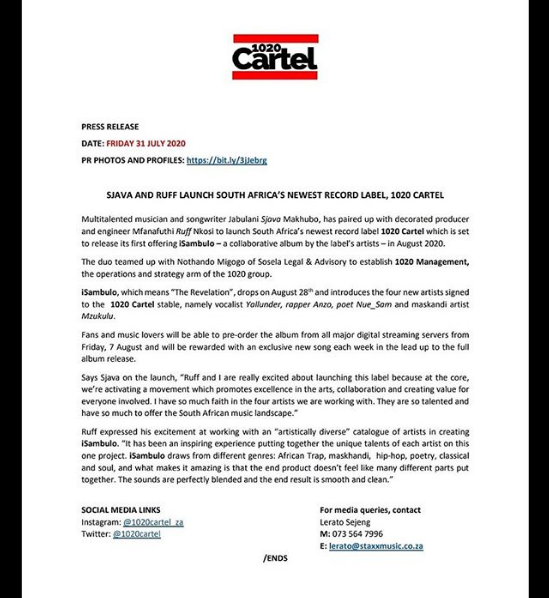 Tags
Ruff ATM Sjava
John Israel A Send an email 31 July 2020
Back to top button
Close
We use cookies on our website to give you the most relevant experience by remembering your preferences and repeat visits. By clicking “Accept All”, you consent to the use of ALL the cookies. However, you may visit "Cookie Settings" to provide a controlled consent.
Cookie SettingsAccept All
Manage Privacy