Making music as a solo artiste, and even featuring as a guest on the works of others, might be easy for Sjava. However, right now, dude is having difficulty picking the best cover for a new project.

Sjava’s friend Manu Wordlstar featured him on the song “Nalingi (Remix)” alongside the Zambian star Roberto and Ghana’s $pacely. The original track was Manu Worldstar’s debut and a hit with fans across Mzansi. 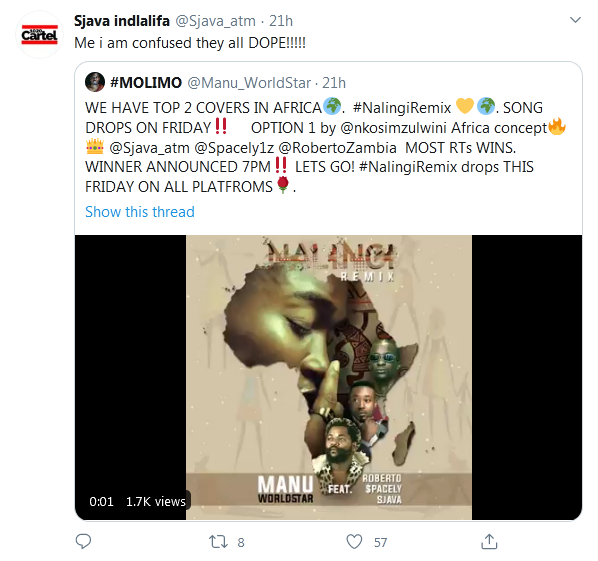 To promote the remix prior to release, Manu Worldstar encouraged graphic designers to submit artwork for the song. Several entries were submitted and five were eventually shortlisted. The list has finally been narrowed to two.

Are you ready for what is to come? We will bring the song to you here at UbeToo on release. So subscribe to our feed and stay tuned for updates. Tomorrow is almost here.

Well, have you any suggestions for the BET award winner and Manu Worldstar. They would appreciate your suggestions in the comment section below.go ahead and sound off.

Tags
Fuse Sjava
John Israel A Send an email 23 July 2020
Back to top button
Close
We use cookies on our website to give you the most relevant experience by remembering your preferences and repeat visits. By clicking “Accept All”, you consent to the use of ALL the cookies. However, you may visit "Cookie Settings" to provide a controlled consent.
Cookie SettingsAccept All
Manage Privacy