Sjava is doing great in South African music and wouldn’t like to be compared with anyone – not with Kanye West, anyway.

So when a fan made the comparison, the songster rejected it outright and asked for what’s due to him. In a tweet, a fan had noted that the songster was beginning to sound like the American rapper Kanye West.

Apparently displeased by that comparison, the songster had responded, asking to be respected. Kanye West, who recently celebrated his birthday, might be a great artist, but Sjava wouldn’t want to be compared with him.

He’s very much his own man, and he wants everyone to know that. 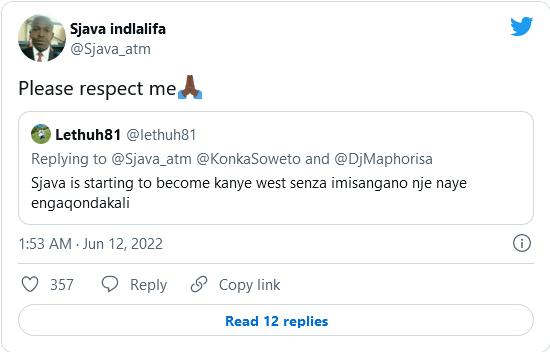 By the way, although it may have been a while since he released a new project, Sjava is keen that fans shouldn’t be violent in requesting new music. That will come when it will come. Until there, there’s “Umama” and other works that fans can vibe with as they wait. Not bad.

Tags
Kanye West Sjava
John Israel A Send an email 13 June 2022
Back to top button
Close
We use cookies on our website to give you the most relevant experience by remembering your preferences and repeat visits. By clicking “Accept All”, you consent to the use of ALL the cookies. However, you may visit "Cookie Settings" to provide a controlled consent.
Cookie SettingsAccept All
Manage Privacy