Sjava announced as the next guest to feature on AKA’s “The Braai Show” airing on SABC 1.

A big shoutout to Mzansi rapper, AKA for thinking up The Braai Show. It has been a huge success since it began airing on SABC 1 every Thursday. The show sees him host some of the most entertaining and most controversial celebs in the country.

We have seen him link up with Somizi, DJ Tira, Scoop Makathini and more. Now, he’s set to have “Linda” hit maker, Sjava in the house with him. That’s definitely something to look forward to. We are very much excited as much as the fans are who also can’t wait to see it.

Sjava has been up to a lot this year. Although he’s been trailed by news of alleged assault leveled on him by Lady Zamar, he’s managed to kick things off with his and Ruff’s new label, 1020 Cartel. The show airs at 19:30 this Thursday on SABC 1. 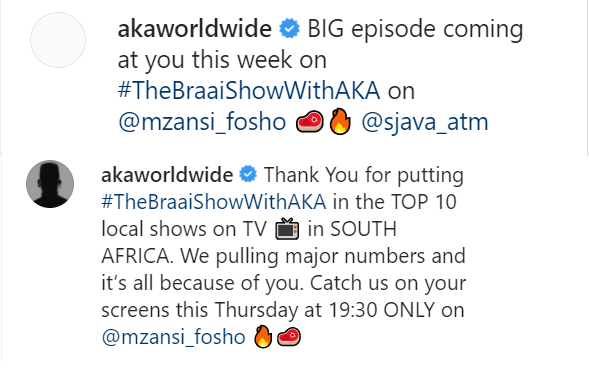 Tags
AKA Sjava The Braai Show
John Jabulani Send an email 16 December 2020
Back to top button
Close
We use cookies on our website to give you the most relevant experience by remembering your preferences and repeat visits. By clicking “Accept All”, you consent to the use of ALL the cookies. However, you may visit "Cookie Settings" to provide a controlled consent.
Cookie SettingsAccept All
Manage Privacy