Mzansi media personality Pearl Thusi has fired a shot at YouTuber Slik Talk, stating in a recent tweet that the controversial vlogger was waiting for his wounds to heal to return to shading people on social media.

Slik Talk had suffered a humiliating defeat in the hands of Family Tree rapper Cassper Nyovest during their Fame Vs Clout boxing match in December last year. Slik Talk had posted about the fight a day after and then vanished.

With weeks going into months and Slik Talk not dropping incendiary videos as usual, South Africans began to wonder if he’s okay. Others would rather joke that Slik had taken a break to enjoy the R100k he got from Cass after the fight.

At any rate, the divorce between Minnie Dlamini and her American husband Quinton Jones was enough to bring Slik Talk back from his enforced hiatus. Slik Talk shared a new video about the couple, describing Quinton as a beta male and Minnie as a gold digger.

Popular tweeter Chris Excel fired a mordant joke at Slik Talk and how he waited until his R100k win was over before returning to sharing videos. Reacting to the tweet, Pearl said she thought Slik was waiting for his wounds to heal before getting back to shading celebs. 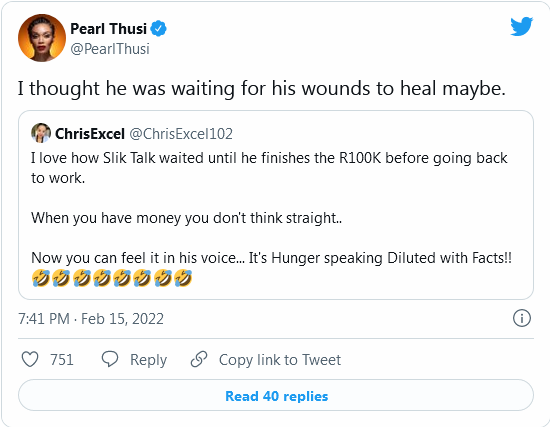 Tags
Pearl Thusi Slik Talk
John Israel A Send an email 17 February 2022
Back to top button
Close
We use cookies on our website to give you the most relevant experience by remembering your preferences and repeat visits. By clicking “Accept All”, you consent to the use of ALL the cookies. However, you may visit "Cookie Settings" to provide a controlled consent.
Cookie SettingsAccept All
Manage Privacy