English singer Adele apparently has some of the most loyal fans out there. Following the announcement she would be on Saturday Night Live, fans are already assuming she is set to release a new album.

The songstress herself has neither confirmed nor denied an album is on the way. Something is certainly on the way, however, for as Adele said, she is bloody excited about what is imminent, and absolutely terrified as well.

There’s no mention of a new project on the way. But the assumption, amplified by Adele Daily, is that the songstress really has something in the works and might drop it soon. She could not have appeared on one of the biggest shows in the world and spoken of being excited about what is imminent, and not at least have a project on the way. You can check out the tweet below. 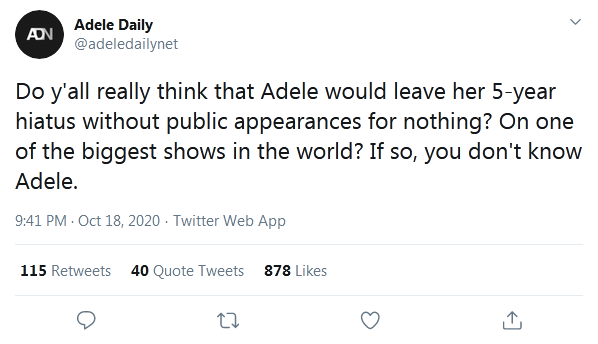 Well, do you think Adele is dropping an album soon? You can speculate all you like in the comment section.

One thing you can vouch on is that if she should release an album, we would sgare it with you all here at UbeToo. To stay in the loops and miss nothing, you might want to subscribe to our newsfeed as well as follow our social media channels.

Tags
Adele
John Israel A Send an email 20 October 2020
Back to top button
Close
We use cookies on our website to give you the most relevant experience by remembering your preferences and repeat visits. By clicking “Accept All”, you consent to the use of ALL the cookies. However, you may visit "Cookie Settings" to provide a controlled consent.
Cookie SettingsAccept All
Manage Privacy