He popped on the medium yesterday, Thursday, February 10, to speak about the state of the nation, but some politicians among his supposed audience were unimpressed and they made fun of his “cheap suit.”

South African president Cyril Ramaphosa was addressing South Africans in what is known as the state of the nation address (SONA), a regular affair from the presidency to clue the Rainbow Nation in on the journey so far.

The presidency highlighted key points of the speech, but the likes of Julius Malema were completely unimpressed. As usual, the tempestuous EFF leader fired critically, “Why is the president telling us about his shoes and his cheap suit?”

Never a big fan of the current president, Julius Malema, who has been gunning for the presidency of South Africa for a while, is more for the development of local industries. And he feels there ought to be a sense of urgency in hiring and procuring locally – something he thinks the government has obstinately refused to address.

For John Steenhuisen, leader of the Democratic Alliance (DA), there’s a long way to go. He is adamant that unless South Africa addresses water, safety and electricity issues, it will have difficulty attracting foreign investments. See the video below. 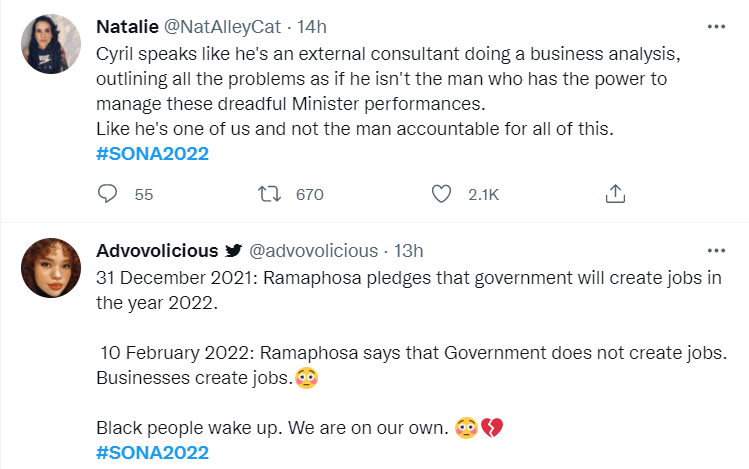 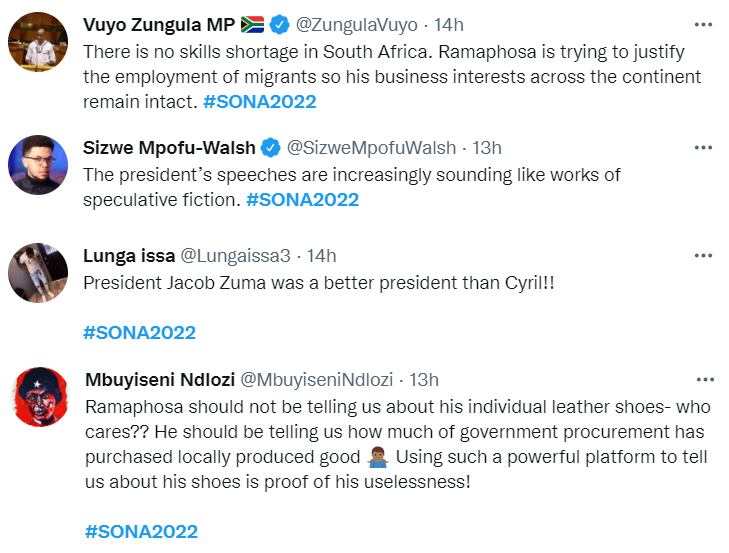 This is the real State of the Nation 🇿🇦💔 🇿🇦

Not some word-smithed rhetoric from President Cyril Ramaphosa

Cry the beloved Nation under the ANC that has forsaken its people #SONA2022 #sona pic.twitter.com/yJCbThZx8e

It has been the same preach for 4 years now. #SONA2022 pic.twitter.com/pVVdfJ3Ocn

Tags
Cyril Ramaphosa SONA
John Israel A11 February 2022
Back to top button
Close
We use cookies on our website to give you the most relevant experience by remembering your preferences and repeat visits. By clicking “Accept All”, you consent to the use of ALL the cookies. However, you may visit "Cookie Settings" to provide a controlled consent.
Cookie SettingsAccept All
Manage Privacy