Big Zulu, Riky Rick and Inta Yase Dubai’s “Imali Eningi” was one of the biggest songs in South Africa last year. Ordinarily, that success would have made everyone behind the song happy. But that’s not the case right now.

Intaba Yase Dubai recently aimed that he didn’t receive a cent in royalty from the song. Still, Big Zulu refuted it, clarifying that the songster was paid via Ambitiouz Entertainment, the record label to which Intaba is signed.

And Ambitiouz Entertainment has just collaborated the same. In a statement posted to its verified Instagram page, Ambitiouz noted that it had entered into a partnership with Big Zulu’s Inkabi Records and was given 25 per cent ownership of the song.

It noted that it received the first royalty statement from Inkabi Records a year after the song was released, as well as a payment of R94, 54,527,31.

Out of that sum, the label claimed that it had paid Intaba Yase Dubai his proceeds according to the agreement he had with the record label. It also Co formed that Big Zulu has no outstanding royalty payment due. It also clarified that all publishing income for the song is paid directly into Intaba Yase Dubai’s account by the South African Musical Rights Organization (SAMRO) and not by the record label. You can check out the complete statement below. 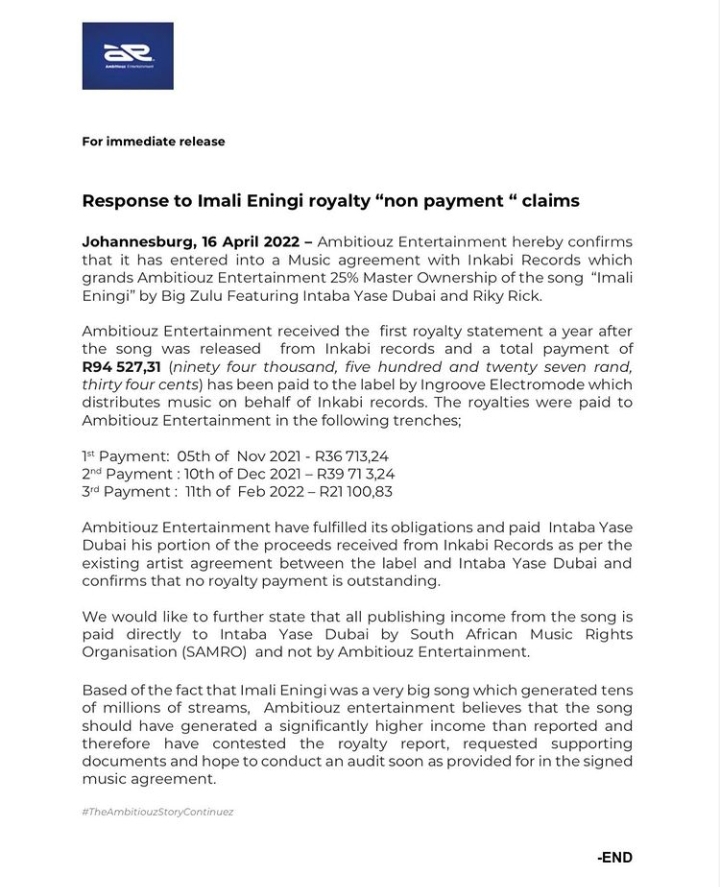 So far, Intaba Yase Dubai has said nothing about the clarification from Ambitiouz Entertainment.

Tags
Ambitiouz Entertainment Big Zulu Intaba Yase Dubai
John Israel A Send an email 18 April 2022
Back to top button
Close
We use cookies on our website to give you the most relevant experience by remembering your preferences and repeat visits. By clicking “Accept All”, you consent to the use of ALL the cookies. However, you may visit "Cookie Settings" to provide a controlled consent.
Cookie SettingsAccept All
Manage Privacy