Stogie T’s resilience has paid off finally. The emperor of “The Empire of Sheep” EP has always wanted to have Damian Marley, the son of the reggae legend Bob Marley, on his album but failed for two consecutive years. Now’s he’s got Damian on a number.

Stogie T, who has been described as one of the finest lyricists from South Africa, announced the good news in a tweet yesterday 23 August 2020. According to the songster, whose legal name is Tumi Molekane, Jay-Z’s Roc Nation was instrumental in getting Damian Marley to work with him. 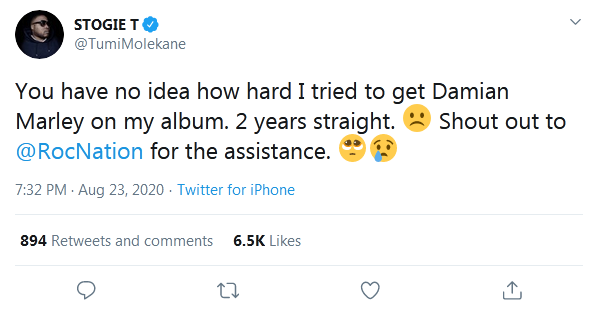 Damian Marley isn’t the only singer the South African musician has always wanted to work with. There are others (unnamed by him) that he wanted to feature alongside Damian Marley on “The Empire Of Sheep” but failed.

A Stogie T- Damian Marley song, when it drops, might be justly called the song of veterans. Both are old in the industry and justly respected for their art. In fact, they would make a great collaboration given their musical inclinations and the fierceness of their deliveries. If you are conversant with the two, then you’re conversant with art.

Keep your eyes peeled, as we’re going to share the collaboration between the Stogie T and Damian Marley when it drops.