Last year, Mzansi rapper, Stogie T took over social media and the SA Hip Hop industry with his very intriguing freestyles. Literally everyone was impressed by it. It wasn’t really surprising when he was named Best Lyricist at the 2020 SA Hip Hop Awards.

We all thought it was well deserved. Stogie has also recently began to executive produce his own Freestyle show on Channel O. A recent tweet by Sean Pages got a much needed reaction from the “Dunno” rapper. He tweeted his favourite Freestylers to be Youngsta, L-Tido, Da Les, and Maggz.

Reacting to it, Tumi also shared his list including “L-Tido, Snaz D, YoungstaCPT, Verb and Zubz to be faves. He went on to reveal that the very best freestyle he ever heard was from Gemini of Cashless Society. A good number of followers also agree with him. 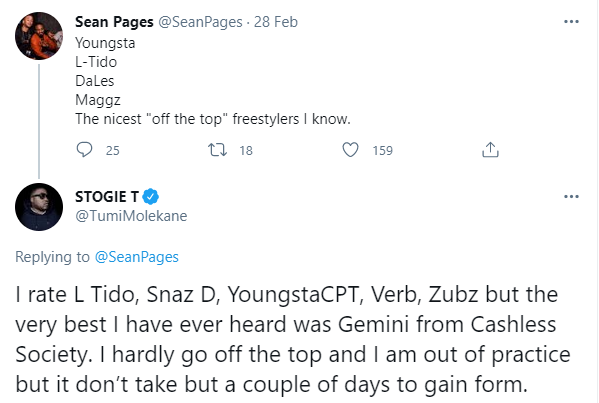