2020 was very much bearable because of some artists who thought out amazing ways to entertain the entire country. Shoutout to Mzansi’s very talented lyricist, Stogie T who delivered the Freestyle Friday show to us reviving freestyle rap all over the country.

He has revealed that his mission is to make SA rap again. It should excite you to hear that he’s back for yet another season. The show is set to make its premiere on Channel O this weekend on Friday, February 12th.

The new Freestyle Friday show will feature Shane Eagle, YoungstaCPT and various other Mzansi lyricists. From what we’ve heard, it is going to be way more entertaining than the previous one. Catch it at 5PM this weekend. This will certainly be a good one for SA Hip Hop. 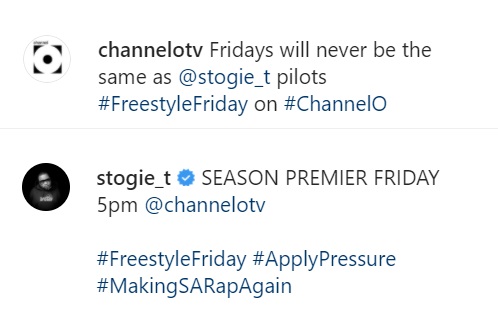 Tags
Shane Eagle Stogie T YoungstaCPT
John Jabulani9 February 2021
Back to top button
Close
We use cookies on our website to give you the most relevant experience by remembering your preferences and repeat visits. By clicking “Accept All”, you consent to the use of ALL the cookies. However, you may visit "Cookie Settings" to provide a controlled consent.
Cookie SettingsAccept All
Manage Privacy