After the teaser comes the real thing, right? Well, Supta has just given the release date for his “Haha” song featuring Lady Zamar.

Previously, the songster had merely teased snaps from his studio session with the “Butterfly” songstress. He has taken things a notch higher by giving the release date for the intensely anticipated song.

In a tweet on January 18, the songster had announced with apparent sense of relief that the song will be out this Friday 22 January. 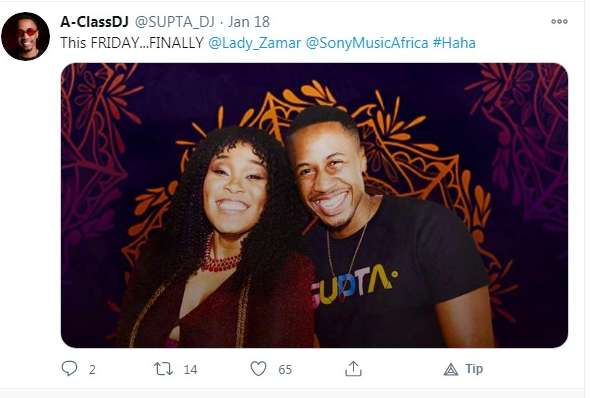 Fans were active in the comment section, letting the disc jockey and producer know they just can’t wait to have the song. Well, we can’t wait, either.

As the leading South African music blog, you can count on us to bring the song to you on release. In order to be among the first to listen to “Haha” and have a good time, you might want to follow our social media channels as well as subscribe to our newsfeed.

By the way, speculations are rife the pair will release a music video to go with the song. But neither of them has confirmed this. At any rate, if a video should drop as well, we’d bring it to y’all.

Tags
Lady Zamar Supta
John Israel A Send an email 20 January 2021
Back to top button
Close
We use cookies on our website to give you the most relevant experience by remembering your preferences and repeat visits. By clicking “Accept All”, you consent to the use of ALL the cookies. However, you may visit "Cookie Settings" to provide a controlled consent.
Cookie SettingsAccept All
Manage Privacy