Peeps who think Cassper Nyovest has a serious conflict with footballer Andile Mpisane, or wants them to, were scratching their head the other day after they two were photographed partying hard at Club Konka.

The Occasion was the launch of Cassper Nyovest’s Billiato alcohol brand. And Andile was on the ground to support Cassper.

The footballer and his pal Shaun the Stylist apparently bought all the stock of Billiato at the club. And Cassper ended up having to buy some of the bottles back from Andile so he can celebrate too.

He detailed that in a tweet which you can check out below. 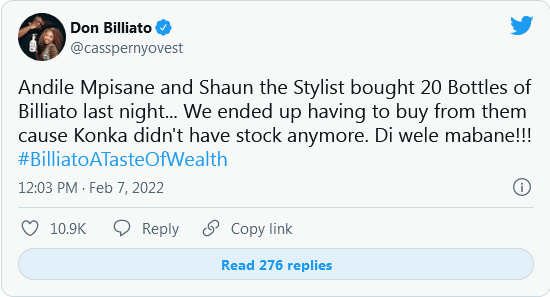 Andile’s move at club Konka surprised some social media watchers because he was reported to be in a love triangle with Cassper Nyovest’s baby mama.

Rumors had it that Andile Mpisane, the only son of the businesswoman Shauwn Mkhize, was sleeping with Cassper Nyovest’s baby mama Thobeka Majozi and might have fathered the son Cassper Nyovest is taking as his.

Also, a semblance of what some peeps considered a conflict had erupted between them after Andile Mpisane rubbished Cassper’s claim that he’s the first South African to own a McLaren.

Well, it’s all fine and dandy between them – as the cliché goes.

Tags
Andile Mpisane Cassper Nyovest
John Israel A Send an email 8 February 2022
Back to top button
Close
We use cookies on our website to give you the most relevant experience by remembering your preferences and repeat visits. By clicking “Accept All”, you consent to the use of ALL the cookies. However, you may visit "Cookie Settings" to provide a controlled consent.
Cookie SettingsAccept All
Manage Privacy