Radio presenter Tbo Touch is back to Metro FM – a station he was served before he was fired.

Away from Metro FM back then, the radio nut had linked up with some of his pals (who were equally fired from their presenting jobs) to launch was they dubbed FM – “Fired” because they were all fired. Lol.

Not much has been heard of that station championed by DJ Fresh, Euphonik,  Tbo Touch, and DJ Sbu. And with Tbo Touch returning to the media house he once worked for, the future of Fired FM has been a subject of debate.

After watching this episode, Metro FM had to hunt down Tbo Touch

The news of Tbo Touch’s return to Metro FM is currently generating great excitement online among his fans, with many of them stating he would bring new life to the station he left six years ago in controversial circumstances.

Tbo Touch is going back to Metro FM. pic.twitter.com/tnm0YDTHDv 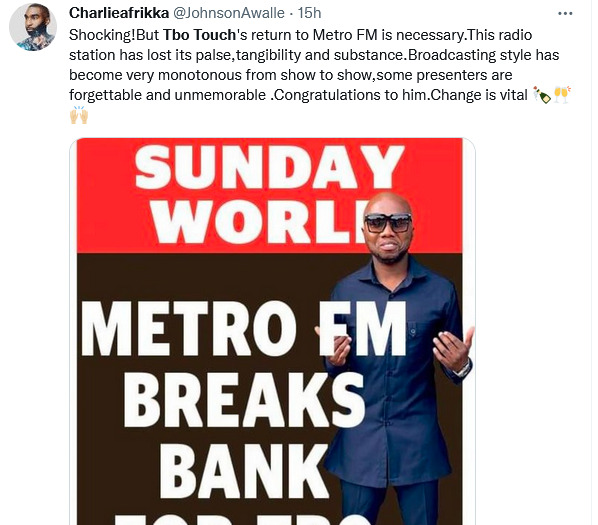 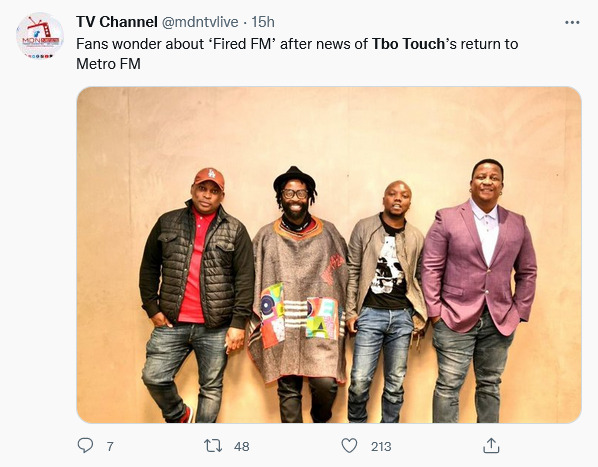 It remains to be seen what impact his return to the station would bring. Stay tuned.

Tags
Tbo Touch
John Israel A Send an email 7 March 2022
Back to top button
Close
We use cookies on our website to give you the most relevant experience by remembering your preferences and repeat visits. By clicking “Accept All”, you consent to the use of ALL the cookies. However, you may visit "Cookie Settings" to provide a controlled consent.
Cookie SettingsAccept All
Manage Privacy