Is Drake the greatest rapper of all time (GOAT)? Controversial rapper Tekashi 6ix9ine  thinks so. Also he thinks fellow rapper Lil Durk’s song “The Voice” did not do well because the songster didn’t have Drake on it.

Lil Durk’s “The Voice” had debuted at No. 62 on this week’s Hot 100 on Billboard and Tekashi 6ix 9ine used the opportunity to diss him. You can check out his post below. 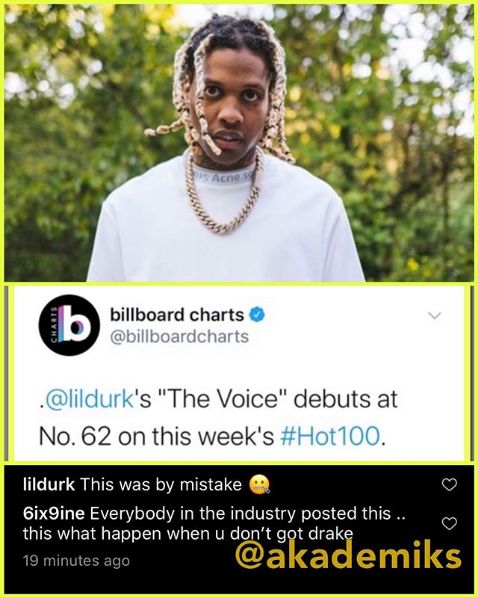 By the way 6ix9ine isn’t alone in his verdict about Drake’s rap greatness. Fat Joe had about a month back described the Canadian rapper as another Michael Jackson.

6ix9ine’s verdict on the song dropped amidst some media fails. The songster had wanted to appear on Joe Budden’s podcast. It was even reported that his media team was prepared to pay for the interview, but Joe Budden declined to interview him, choosing integrity over numbers and money.

Budden stated that the rainbow-haired rapper would have used the opportunity for another snitching round on his (Tekashi’s) past associates. The “TROLLZ” rapper has managed to secure sit-downs with TSR and Paul Logan’s ImPaulsive, though.

Lil Durk, who is at the receiving end of 6ix9ine’s acid humour, had back in August featured on Drake’s “Laugh Now Cry Later” song, which is part of the imminent “Certified Lover Boy” album.

Tags
Drake Lil Durk Tekashi 6ix9ine
John Israel A Send an email 16 September 2020
Back to top button
Close
We use cookies on our website to give you the most relevant experience by remembering your preferences and repeat visits. By clicking “Accept All”, you consent to the use of ALL the cookies. However, you may visit "Cookie Settings" to provide a controlled consent.
Cookie SettingsAccept All
Manage Privacy