Mzansi media personality Dineo Ranaka has been accused of assault by Tengetile Khumalo.

According to Tengetile Khumalo, she had paid Dineo Ranaka, who’s also a DJ R10k to play at an event. She asked to take a picture with Dineo during the performance but the DJ declined.

But then when she headed to the restroom, she claimed that Dineo Ranaka followed her there and scratched her arm.

Interestingly, the claim follows Dineo Ranaka’s recent statement that she was tired of being attacked and therefore needed to hire new security. It cannot be determined what exactly went down with Tengetile Khumalo, as Dineo has yet to comment on her claims. 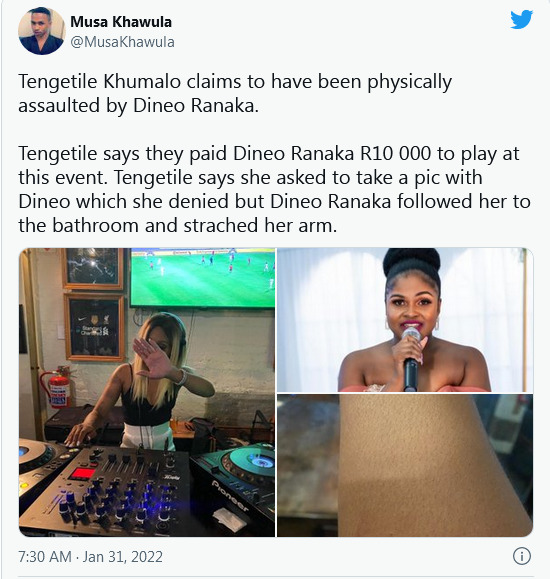 By the way, Dineo Ranaka recently had issues with her employer, Metro FM. The station had suspended her from her role as a presenter after she joined in the  Mlando challenge.

According to the station, she did the challenge by dancing on expensive office furniture. Her suspension elicited mixed reactions back then, with the likes of Pearl Thusin coming to her defense. Dineo Ranaka was later recalled to her beat as a presenter to the station.

Well, it remains to be seen how Dineo Ranaka will respond to Tengetile Khumalo’s claims of assault.

Tags
Dineo Ranaka
John Israel A Send an email 1 February 2022
Back to top button
Close
We use cookies on our website to give you the most relevant experience by remembering your preferences and repeat visits. By clicking “Accept All”, you consent to the use of ALL the cookies. However, you may visit "Cookie Settings" to provide a controlled consent.
Cookie SettingsAccept All
Manage Privacy