Teyana Taylor gives birth to her second child with Iman Shumpert in the bathroom again.

Teyana Taylor and husband, Iman Shumpert have welcomed their second daughter. They made the reveal in a post shared on Instagram by Shumpert. While she might still be a new born, she’s already following in her big sister’s footsteps.

According to Iman, the baby was also born in the bathroom. The funny thing about it is that Taylor previously featured as a guest on Nick Cannon’s podcast where she spoke about having her baby. She revealed that she wasn’t sure if she wanted to give birth in a hospital, but would make sure it isn’t in the bathroom or a toilet.

Well, it seems she didn’t make it out in time before the bundle of joy arrived. Shumpert revealed in the post that the baby, Rue Rose was born at 3:28 am on Sunday, September 6th. He also joked that Rue “decided that the baby shower thrown for her and mommy was too lit”. While she didn’t make the party, “she managed the make the next day her birth date.

He also joked about finding bathrooms with more energy when they buy homes. Taylor also shared a video of the newborn. 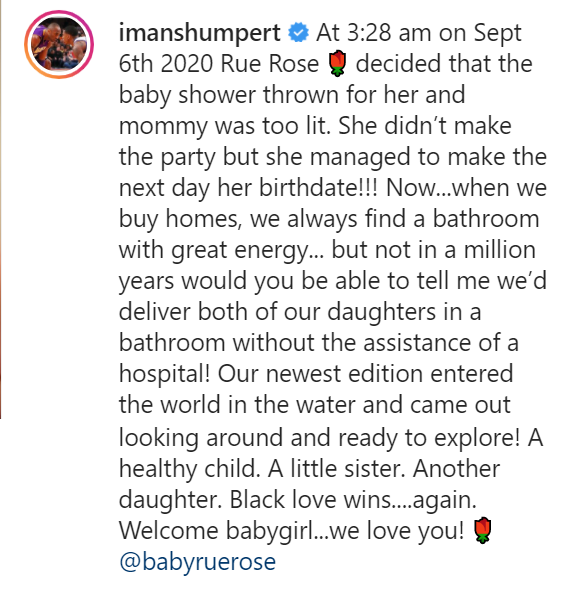 Tags
Teyana Taylor
John Jabulani Send an email 8 September 2020
Back to top button
Close
We use cookies on our website to give you the most relevant experience by remembering your preferences and repeat visits. By clicking “Accept All”, you consent to the use of ALL the cookies. However, you may visit "Cookie Settings" to provide a controlled consent.
Cookie SettingsAccept All
Manage Privacy