It’s no longer news that Cassper Nyovest and Priddy Ugly will be faxing of in a boxing match in what has been dubbed Celeb City Boxing match. Well, regarding the fight, Cassper Nyovest has got some good news and some bad news. The songster himself shared those in a recent tweet.

In the said post, the “Doc Shebeleza” chanter notes that they’d lost the partnership with Supersport, so the fight would no long be televised as earlier planned.

And then comes the good news. According to him, the good news is that tickets for the fight are still available, and those who want to see him spar against Priddy Ugly are welcome to buy their tickets. 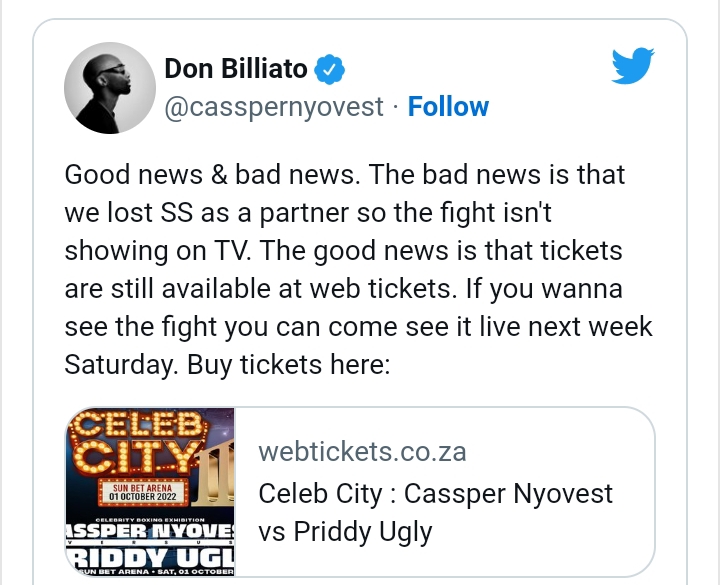 While the fight had been scheduled for October 1, there’s a caveat and Cassper would have to fulfil a condition for the battle to take place. According to Priddy Ugly, in terms of weight, Cassper is about three categories higher than him, and for them to go ahead with the fight on October 1, Cass would have to be 90kg max — which would still make Cass 16kg heavier than Priddy.

If Cass eventually made it, the fight would be his third to date. He’d previously faced Slik Talk and demolished him. He lost his second match against Naakmusiq.

Tags
Cassper Nyovest
John Israel A Send an email 21 September 2022
Back to top button
Close
We use cookies on our website to give you the most relevant experience by remembering your preferences and repeat visits. By clicking “Accept All”, you consent to the use of ALL the cookies. However, you may visit "Cookie Settings" to provide a controlled consent.
Cookie SettingsAccept All
Manage Privacy