South Africa’s The Big Hash and his American counterpart Phora may have found a common ground as musicians thanks to both of them “coincidentally” having the same title for their albums: “Hearbreak Hotel” – or HBH.

Fans had drown The Big hash’s attention to Phora’s album title and The Hash had responded that he isn’t changing his album title for anyone.

Phora, who noticed the tweet, responded that no one is asking The Big Hash to change his album title. He admitted listening to The Big Hash, whom he thinks good as a musician,  but then he made it known the way The Bog Hash had responded might stunt his growth as a musician, ultimately clarifying that “HBH” as a title was used by a different musician before both of them did.

The Big hash was somewhat courteous in his follow-up response, letting Phora know he didn’t mean to be disrespectful he also admitted listening to Elvis, who Phora had ascribed the “HBH” to, promising to listen to Phora’s project on release. You can check out the conversation below. 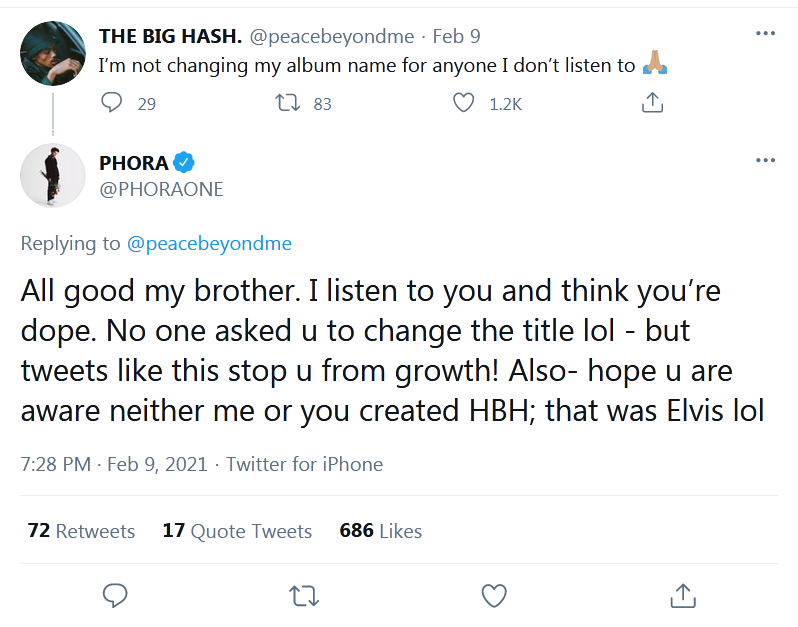 By the way, some fans of The Big hash think he should collaborate with Phora. But would they collaborate ultimately? Time will tell.

Tags
Phora The Big Hash
John Israel A Send an email 10 February 2021
Back to top button
Close
We use cookies on our website to give you the most relevant experience by remembering your preferences and repeat visits. By clicking “Accept All”, you consent to the use of ALL the cookies. However, you may visit "Cookie Settings" to provide a controlled consent.
Cookie SettingsAccept All
Manage Privacy