It’s a great time to be alive, as wanted South African Bolt driver gets apprehended!

On the 24th of February, a bolt driver in South Africa was reported to have forcefully had carnal knowledge of a young woman and did not stop there. The man went the extra mile to strangle her till she drew her last breath, all in a bid to tighten any loose ends.

The news spread quicker than oil on a flat surface, stirring an uprising by those provoked by the news, leading to many other Bolt users rehashing similar experiences encountered while using the transportation service.

The alleged Bolt driver found wanting is a certain Emmanuel, pushing a Nissan Almera car bearing the registration number: HP68PWGP. And because of just how speedily social media swoops in to save the day sometimes, the man has been apprehended and is in police custody.

Apparently, most people have kept their eyes peeled with their ears to the ground since the Bolt driver’s personal information was made public. One of the many wonders of social media, especially Twitter, which is where the news of the bolt driver’s arrest was brought to everyone’s knowledge.

“We got him guys. He’s been arrested. OMG, thank you so much guys, we really wouldn’t have found him this quickly if it wasn’t for you guys… WE GOT HIM!!!! #cancelbolt #boycottbolt,” wrote Lulama. 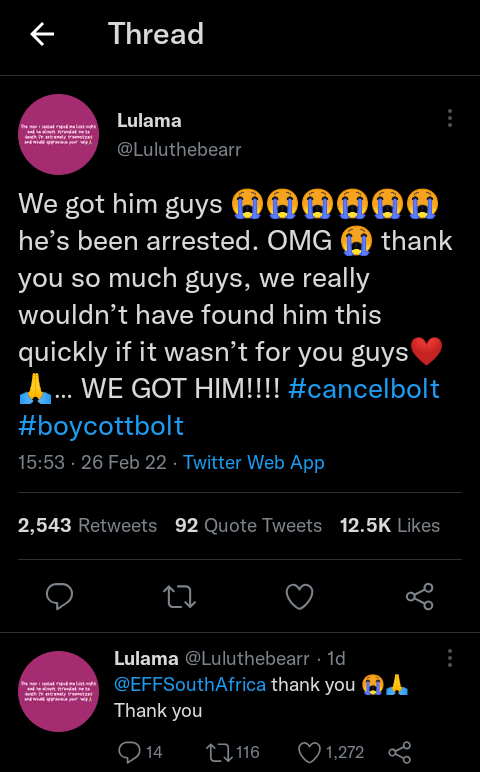 Tags
Bolt Emmanuel
Ikedichim Chibundu Send an email 28 February 2022
Back to top button
Close
We use cookies on our website to give you the most relevant experience by remembering your preferences and repeat visits. By clicking “Accept All”, you consent to the use of ALL the cookies. However, you may visit "Cookie Settings" to provide a controlled consent.
Cookie SettingsAccept All
Manage Privacy