The South African Music Awards 2020 has been announced to hold virtually on Mzansi Magic.

So, it’s been a crazy year with the COVID-19 pandemic causing a ban on large gatherings all over the world and also in Mzansi. This has led to many Entertainment Award shows being held virtually this year.

According to new information shared via the South African Music Awards (SAMAs) official Twitter account, the 2020 award show will also be held virtually. The information was passed on July 6th, with the award show organisers revealing that they would be abiding with the rules and regulations of the nationwide lockdown. This, of course, is the prohibition of mass gatherings. They revealed that the 26th edition of the annual event will be hosted virtually on Mzansi Magic.

According to the post, the SAMA26 event ‘For Tha Kultcha’ will run over five prestigious nights on the Channel, and will be streamed on My Muze and repeated on Channel O. It will be broadcast from Monday, 3 August until Friday, 7 August 2020, and will appear in 30-minute episodes. 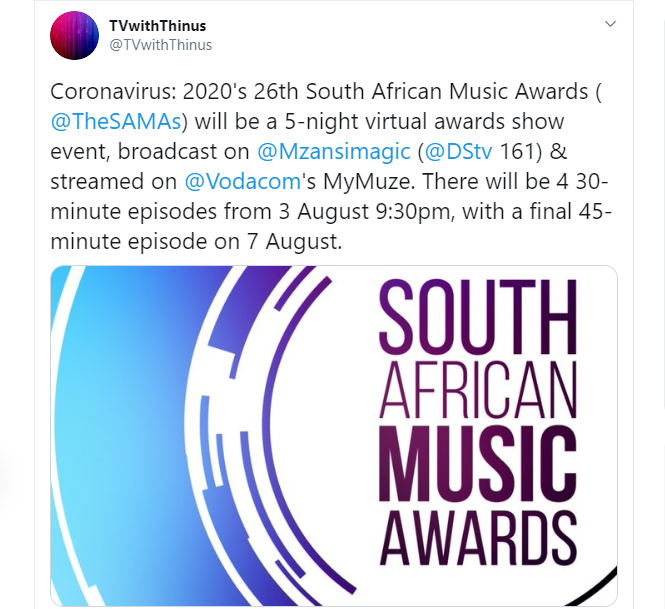 Tags
Lockdown House Party SAMA SAMAs South African Music Awards
John Jabulani Send an email 6 July 2020
Back to top button
Close
We use cookies on our website to give you the most relevant experience by remembering your preferences and repeat visits. By clicking “Accept All”, you consent to the use of ALL the cookies. However, you may visit "Cookie Settings" to provide a controlled consent.
Cookie SettingsAccept All
Manage Privacy