The Weeknd has dismissed claims he has a feud with RnB champ Usher. In an interview back in April, The Weeknd had stated that Usher’s song “Climax” reminded him of his early sound. Usher had released “Climax” back in 2012 to heartwarming reception from the public.

When The Weeknd heard Usher’s song “Climax,” he imagined it was something that might have come from him. He said it was flattering but confessed that he also got angry.

Apparently Usher was informed of The Weeknd’s reaction to the song and responded indirectly in a video on his Instagram story. It’s a rendition of the “Climax” song. You can check it out below

This provoked an interesting debate online, inspiring Diplo, who produced the song, to set the records straight. You can check out Diolo’s thoughts in the screenshot below. 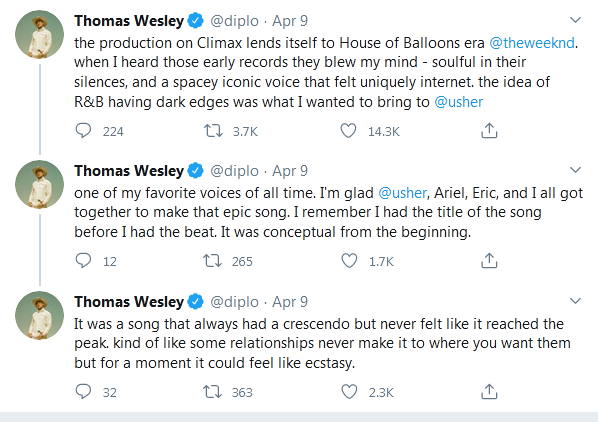 In an interview with Esquire, The Weeknd clarified that he never meant to disrespect Usher, who he describes as a fine gentle with a sweet soul. He said he had apologized to Usher.

This perhaps puts an end to the alleged feud between them. Or what do you think? You may want to join the conversation by sharing your thoughts in the comment section below.

Tags
The Weeknd
John Israel A Send an email 26 August 2020
Back to top button
Close
We use cookies on our website to give you the most relevant experience by remembering your preferences and repeat visits. By clicking “Accept All”, you consent to the use of ALL the cookies. However, you may visit "Cookie Settings" to provide a controlled consent.
Cookie SettingsAccept All
Manage Privacy