South African actress and singer Khanyi Mbau has been applauded for her “perfect” response to a fan of the Showmax series The Wife who was disappointed that she would be a part of the cast.

Khanyi Mbau was announced as part of the cast last year and given the role of a hot-headed lawyer named Zandile. 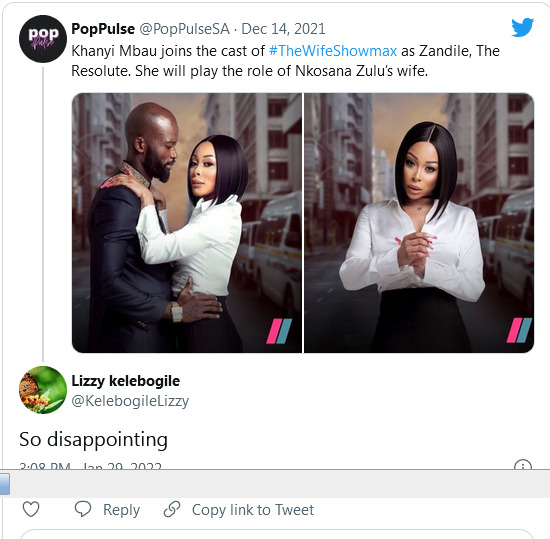 Reacting to Khanyi Mbau joining the cast, however, a Twitter user who goes by the handle @KelebogileLizzy had described it as “disappointing.”

Khanyi Mbau took notice and decided to respond to the “disappointed” fan, noting that life doesn’t always give people what they want. She implored the critic to give the character a chance and let those open to something different experience it.

Many thought her response perfect, and they commended her for it. You can check out the tweet below. While Lizzy appeared disappointed with Khanyi Mbau taking up the role od Zansile, there were many fans who not only welcomed it but applauded her performance as well.

By the way,  The Wife tells a tale of a crime family which is also into the taxi business. It’s an intriguing series that fans just cannot have enough of. And the reviews of Khanyi Mbau’s role have been mostly positive.

Tags
Khanyi Mbau
John Israel A Send an email 1 February 2022
Back to top button
Close
We use cookies on our website to give you the most relevant experience by remembering your preferences and repeat visits. By clicking “Accept All”, you consent to the use of ALL the cookies. However, you may visit "Cookie Settings" to provide a controlled consent.
Cookie SettingsAccept All
Manage Privacy