A while back, Orlando Pirates star Thembinkosi Lorch was severely criticized on social media, with some of his critics noting that he has lost form as a player and people only talk about him as the boyfriend of the actress Natasha Thahane,

All that changed recently following an impressive performance during a march. He was so good that many tweeps who commented about his performance GOAT-ed him, on tweet n0oted that Lorch is a star but that he’s surrounded by “cows” – whatever that means.

The controversial Twitter personality Chris Excel, who fancies himself as the president of black Twitter, noted that Lorch is so good on the pitch that one might end up declaiming his baby mama Natasha Thahane doesn’t owe the state.

Another tweep noted it’s impossible to talk about the Orlando Pirate attacking position without somehow mentioning the name Thembinkosi Lorch. You can check out some of the comments below.

Thembinkosi Lorch before he won POTS 🔥🔥🔥 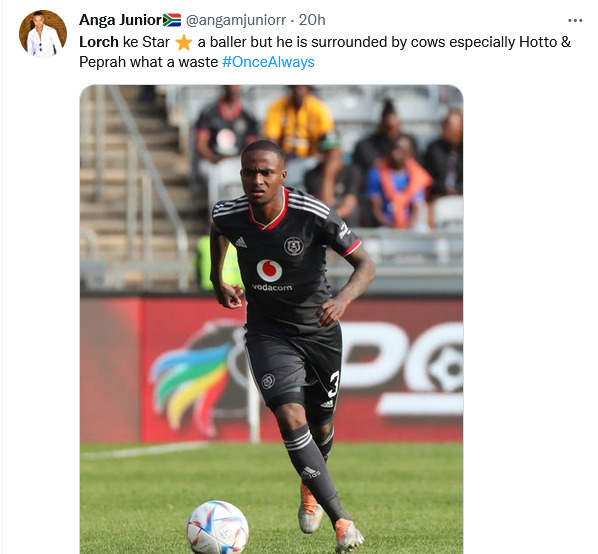 Well, it remains to be seen if Lorch will continue in such splendid forms and what the reaction of the public will be. Whatever the case, you can count on us to bring you all the details. So follow us and stay tuned for updates if you please.

Tags
Thembinkosi Lorch
John Israel A Send an email 15 August 2022
Back to top button
Close
We use cookies on our website to give you the most relevant experience by remembering your preferences and repeat visits. By clicking “Accept All”, you consent to the use of ALL the cookies. However, you may visit "Cookie Settings" to provide a controlled consent.
Cookie SettingsAccept All
Manage Privacy