We are so excited for what is coming from the stables of Mzansi rapper, Reason. Well, who isn’t? The Mzansi star has been promoting it well on social media. By now, everyone on his list should have known about it.

He previously teased the song on Instagram revealing its title to be “Khanda Shisa”. He has also revealed that it was produced by DJ Maphorisa under a new alias, Sizwe (Alakine). This is certainly going to be a good one.

Reason has also stated that the song could be his next “Ngudu”. Read that right, not the next one, but his next “Ngudu”. In case you know story behind the hit produced by Phori, it was massive. Now, Reason is out to dominate with this forthcoming jam. We honestly can’t wait to hear it. 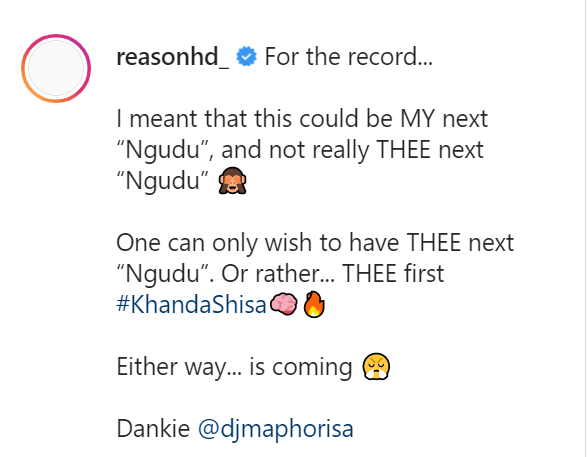 Tags
Dj Maphorisa Reason
John Jabulani7 July 2021
Back to top button
Close
We use cookies on our website to give you the most relevant experience by remembering your preferences and repeat visits. By clicking “Accept All”, you consent to the use of ALL the cookies. However, you may visit "Cookie Settings" to provide a controlled consent.
Cookie SettingsAccept All
Manage Privacy