Besides singing stuff, Family Tree rapper Cassper Nyovest appears to love doing as well. That’s the verdict after it became apparent that he not only released a song titled “eWallet” in collaboration with KDDO, he’d actually sent eWallet to someone who meant a lot to him – his baby mam Thobeka Majozi.

In a recent video shared on Instagram, Cassper Nyovest had urged men should spoil their women during Christmas, and that the least they could do was to send their women eWallets.

Well, for fans who might be wondering if the “Doc Shebeleza” hitmaker was only urging people to send something while not doing the same, Cassper’s girlfriend and baby Mama Thobeka Majozi revealed that he actually sent her money.

The picture she shared online showed that the songster had sent her R3k and bid her good night. The picture partly revealed the faces of Cassper and his son. 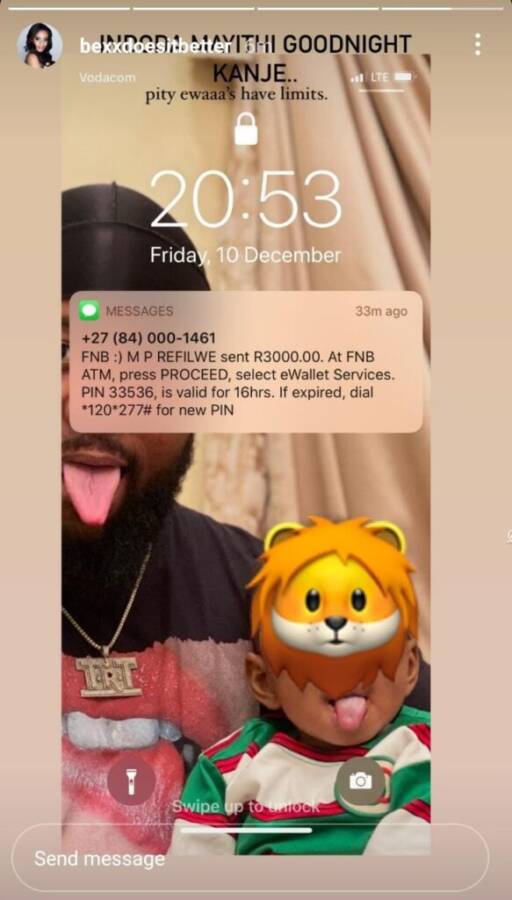 By the way, Cassper Nyovest recently volunteered to organize a boxing match between the Nigerian singer Burna Boy and his Ghanaian counterpart Shatta Wale after Burna noted on Instagram that he want to trade punches with the “Ginger” singer.

If you haven’t listened to the “eWallet” song previously, you may want to check it out below.

Tags
Cassper Nyovest Thobeka Majozi
John Israel A Send an email 4 January 2022
Back to top button
Close
We use cookies on our website to give you the most relevant experience by remembering your preferences and repeat visits. By clicking “Accept All”, you consent to the use of ALL the cookies. However, you may visit "Cookie Settings" to provide a controlled consent.
Cookie SettingsAccept All
Manage Privacy