Finance minister, Tito Mboweni, decided to kill two birds with one stone — treating himself to some of the small pleasures of life and supporting the township economy.

Besides his political role and office, Tito Mboweni has been known for his love for great food. Of course many, if not all men, love food, but only very few amongst them can also whip up something nice in the kitchen. Tito is in that rare category of foodies.

He felt so confident of his cooking back in 2020 that he issued an open invitation to his teeming number of followers of Twitter, when he announced that he’d be serving as the chef at the opening of the Uhuru Café and Wine Emporium in Polokwane, last December. 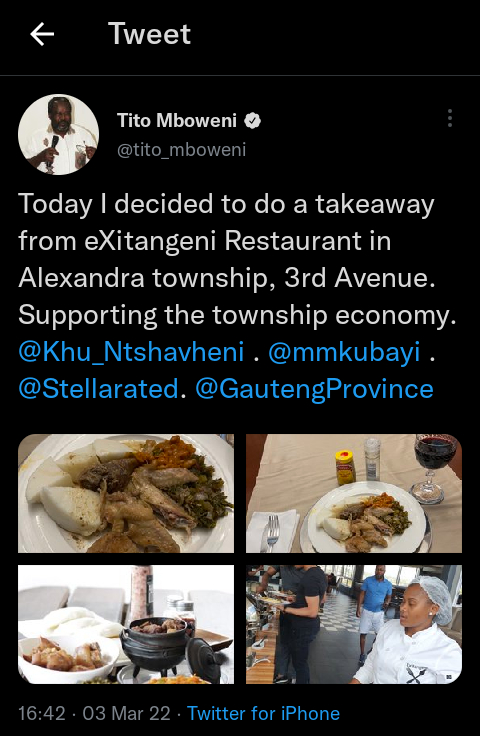 And from his tone in that caption, you could tell he had a swell time at the eatery. So not only was he treating himself to a great variety of dishes, he was also pushing for the support and promotion of township business in order to boost the economy, which is where his finance expertise comes into play.

Tags
Tito Mboweni
Ikedichim Chibundu Send an email 4 March 2022
Back to top button
Close
We use cookies on our website to give you the most relevant experience by remembering your preferences and repeat visits. By clicking “Accept All”, you consent to the use of ALL the cookies. However, you may visit "Cookie Settings" to provide a controlled consent.
Cookie SettingsAccept All
Manage Privacy