Check out the BTS shots from the music video shoot of TNS’ new song “Nyathela”.

It has certainly been an amazing year watching Mzansi hit maker, TNS do his thing. He has kept us on our toes with the promise of his second studio album “Phupholethu: Abantu Last Hope” which is expected in the ending months of the year.

He has also given fans a taste of the double-disc album. He revealed that he will be dropping a song from the album which is titled “Zodwa Wabantu” featuring Luqua, Danger and Peela. The song is scheduled to be released sometime this month. 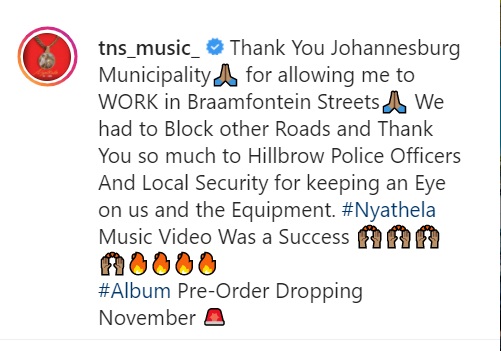 While we wait on that, news is that there’s another song coming. He calls this one “Nyathela”. In a recent post shared on Instagram, he thanked Johannesburg Municipality for letting him film the video in the streets of Braamfontein. He also shouted out the Hillbrow police and local security, for keeping an eye on everything. He revealed that the album will be available for pre-order in November.

Tags
TNS
John Jabulani Send an email 14 September 2020
Back to top button
Close
We use cookies on our website to give you the most relevant experience by remembering your preferences and repeat visits. By clicking “Accept All”, you consent to the use of ALL the cookies. However, you may visit "Cookie Settings" to provide a controlled consent.
Cookie SettingsAccept All
Manage Privacy