The songster died in the early hours of Sunday 23 May, after a performance, according to a statement released by Kalawa Jazmee Records, where Mjokes served as director.

Trompies, the group to which the late Mjokes belonged, was formed in 1995. This kwaito collective has the likes of Spikiri, Mahoota, Donald Duck and Jakarumba as members. The group ruled the airwave in the 2000s but appeared to have declined in visibility. Among the notable songs from the group are “Thalakele,” “Sweety Lavo” and “Magasma.”

The report of Mjokes’ death provoked an outpouring of emotions, with those familiar with him and his music sending their condolences to his family. 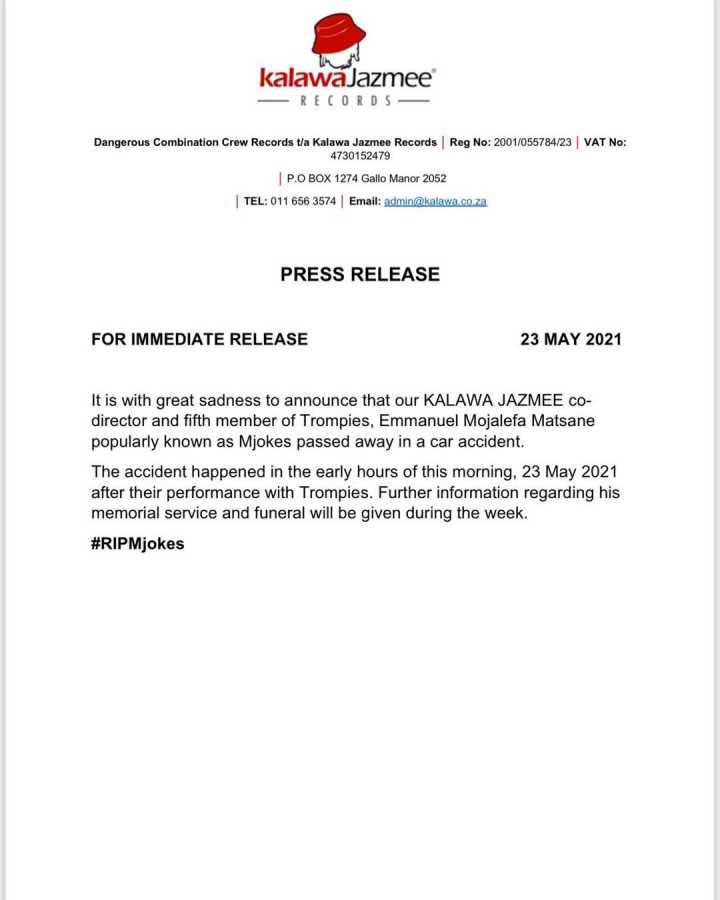 One Twitter user bid the songster rest in peace, adding that Mjokes will forever be in the hearts of those he had touched through his music.

Another Twitter user described his death as a huge loss to the music industry. His funeral details will be announced later. You may want to stay tuned for that by subscribing to our newsfeed.

Got some kind words to share with Mjokes’ family? You’re welcome to drop them in the comment section below.

Tags
Mjokes
John Israel A24 May 2021
Back to top button
Close
We use cookies on our website to give you the most relevant experience by remembering your preferences and repeat visits. By clicking “Accept All”, you consent to the use of ALL the cookies. However, you may visit "Cookie Settings" to provide a controlled consent.
Cookie SettingsAccept All
Manage Privacy