Mzansi hip hop ace Tshego is fed up with his Universal Music deal, and he’s made it clear that he wants out – literally.

When he inked the deal a while back, it was a “big deal” in Mzansi music circles because not all musicians get to sign a recording deal with a global music brand.

In a recent post to his Instagram Story, the songster noted that his next album will be as random as can be. And after that, he’d be done with Universal Music, which he said doesn’t deserve him. You can check it out below. 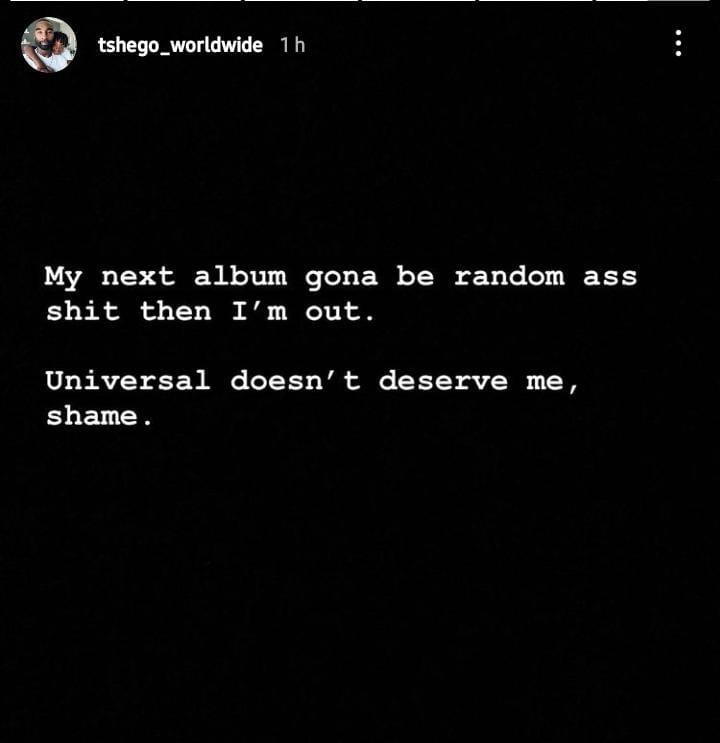 Before joining Universal Music, Tshego was signed to Cassper Nyovest’s Family Tree record label. The relationship started on a great note but flopped halfway, with Tshego claiming he never received a dime from the sale of his music.

When he joined Universal, he’d released some great music, including the hit “No Ties.”

Now, well, Tshego wants no ties with the record label. He’s consumed with ambition and wants to do things his own way – you know, have control over a lot of things, including when he drops new music, how much he spends on PR, and so much more.

Well, watch out for his last album on the Universal platform.

Tags
Tshego
John Israel A Send an email 7 March 2022
Back to top button
Close
We use cookies on our website to give you the most relevant experience by remembering your preferences and repeat visits. By clicking “Accept All”, you consent to the use of ALL the cookies. However, you may visit "Cookie Settings" to provide a controlled consent.
Cookie SettingsAccept All
Manage Privacy