Johannesburg-born rapper Tumelo Thandokuhle Mathebula, who is professionally known as Tweezy, is only 27, but he has achieved so much already. This much should be obvious from the list of his accomplishments he compiled himself.

Tweezy shared the list on his social media channels, leaving fans awwwing. From the list, it was obvious Tweezy is an excellent producer and has produced for the industry’s major names, including AKA and Nasty C.

Most of the songs Tweezy produced have either earned platinum or gold status. Surprisingly, not many know Tweezy as a producer. Many simply see him as a rapper with a couple of hit tunes to his name. Well, not anymore.

Tweezy won the South Africa Hip Hop Awards (SAHHA) in the Producer Of The Year category for two years in a row. (2015 and 2016). One of the few producers with such distinction. You can check out the full list of his accomplishments below. 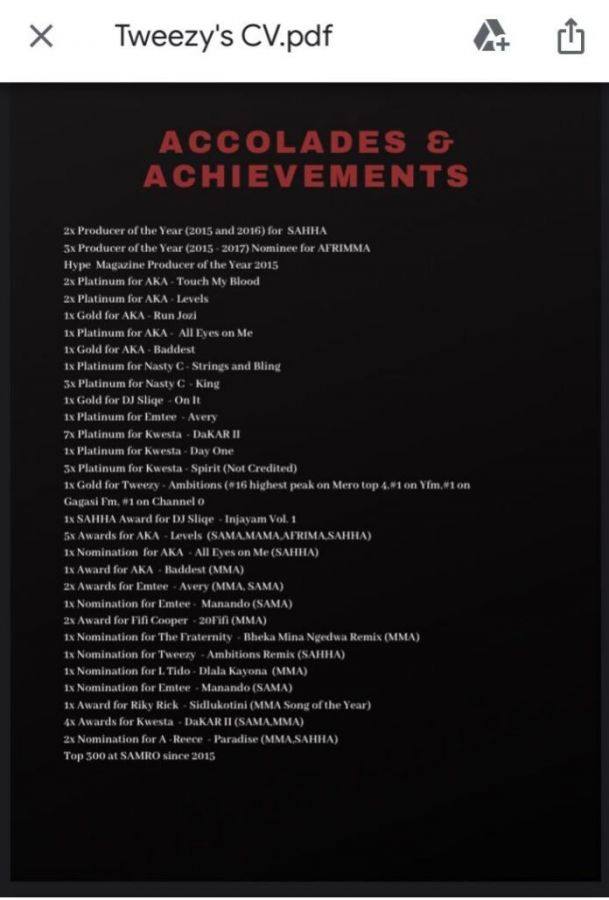 What do you make of the list? You are welcome to join the conversation by dropping your thoughts in the comment section below.

Tags
Tweezy
John Israel A Send an email 26 August 2020
Back to top button
Close
We use cookies on our website to give you the most relevant experience by remembering your preferences and repeat visits. By clicking “Accept All”, you consent to the use of ALL the cookies. However, you may visit "Cookie Settings" to provide a controlled consent.
Cookie SettingsAccept All
Manage Privacy