It has been said the Internet never forgets. This much may have just been confirmed after a fan unearthed a tweet in which A-Reece had claimed that he had a  J. Cole feature.

In the tweet, which dates back to 2014, A-Reece had claimed that  J. Cole had sent him his verse for what should have been “Browniez EP.”

So what really happened? Did A-Reece tweet back then just for clout? Or perhaps he actually recorded a song with the songster but it was never released?

Well, most fans were unconvinced he actually recorded a song with J. Cole. To prove this, one particular fan had tagged the American and his Dreamville records, asking when they would be sending the verse recorded for A-Reece. 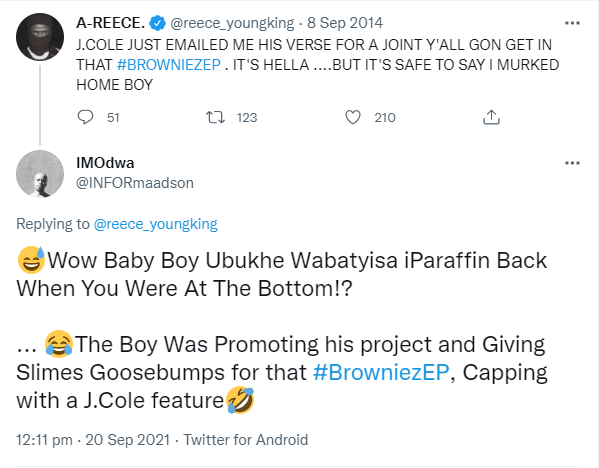 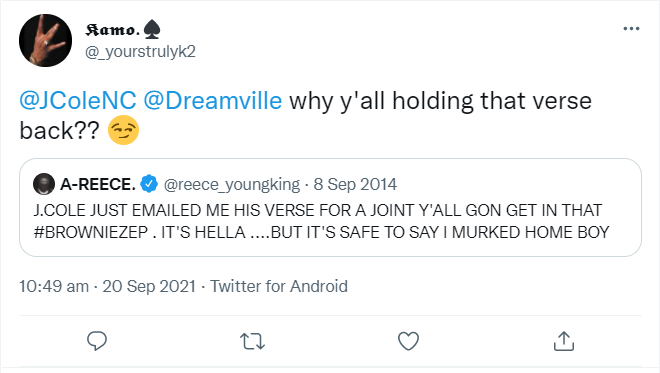 Last we checked-A-Reece has not responded to fans throwing jabs at him for having “misled” fans back then.

By the way, A-Reece was one of the names fans throw at Meek Mill when he asked which South African musician he should collaborate with for his imminent “Expensive Pain” album.

Tags
A-Reece
John Israel A Send an email 20 September 2021
Back to top button
Close
We use cookies on our website to give you the most relevant experience by remembering your preferences and repeat visits. By clicking “Accept All”, you consent to the use of ALL the cookies. However, you may visit "Cookie Settings" to provide a controlled consent.
Cookie SettingsAccept All
Manage Privacy