Metro FM presenter Dineo Ranaka has been suspended from office over what the radio corporation dubbed a misconduct.

An exuberant Dineo Ranaka had filmed herself dancing on office furniture, an act that apparently riled the management of the company, ultimately earning her a suspension.

The news of her suspension was broken by media personality Phil Mphela in a recent tweet which you can check out below.

The news of Dineo Ranaka’s suspension was confirmed by SABC’s group executive for corporate affairs, Gugu Ntuli, who noted, “The SABC can confirm that Dineo Ranaka is not scheduled on Metro FM at this stage.” 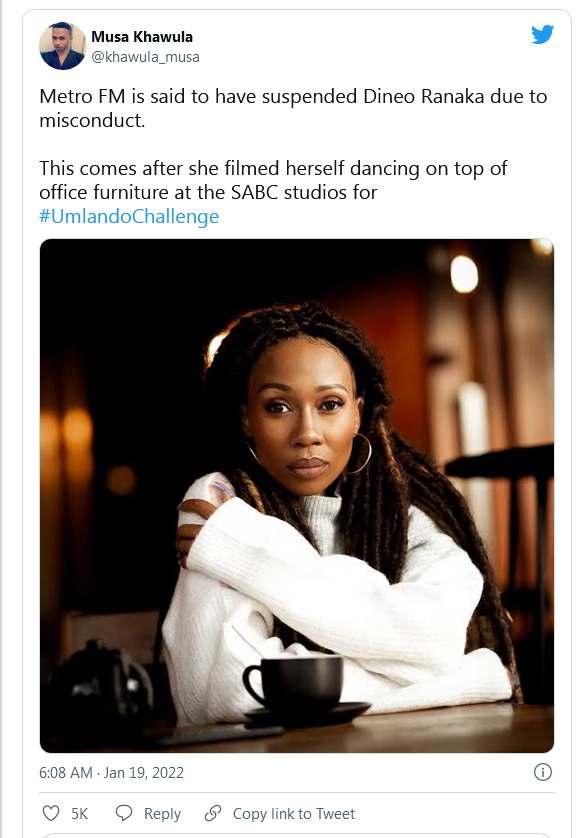 Dineo Ranaka, who’s also a disc jockey and producer, has not addressed the suspension, nor do we expect her to.

It cannot be determined if and when the suspension will be lifted. At any rate, we are following events keenly ad will bring y’all more details as they drop.

By the way, Dineo Ranaka recently shot down claims she was exploiting an employee after a makeup artist claimed that the presenter refused to pay her after working for her. Dineo Ranaka had reportedly declined to pay, noting that R3k worth of makeup stock went missing after Felicia Zwane finished working and left.

Tags
Dineo Ranaka Metro FM
John Israel A Send an email 19 January 2022
Back to top button
Close
We use cookies on our website to give you the most relevant experience by remembering your preferences and repeat visits. By clicking “Accept All”, you consent to the use of ALL the cookies. However, you may visit "Cookie Settings" to provide a controlled consent.
Cookie SettingsAccept All
Manage Privacy