Idols SA judged Unathi Nkayi has dismissed claims she was moody when DJ Zinhle popped on the show as a guest judge.

A Twitter user who goes by the handle @phindypee had stated that Unathi wasn’t happy when DJ Zinhle, one of South Africa’s most-loved singers, joined the judging panel. But Unathi dismissed this, imploring the Twitter user not to provoke a beef where none exists. 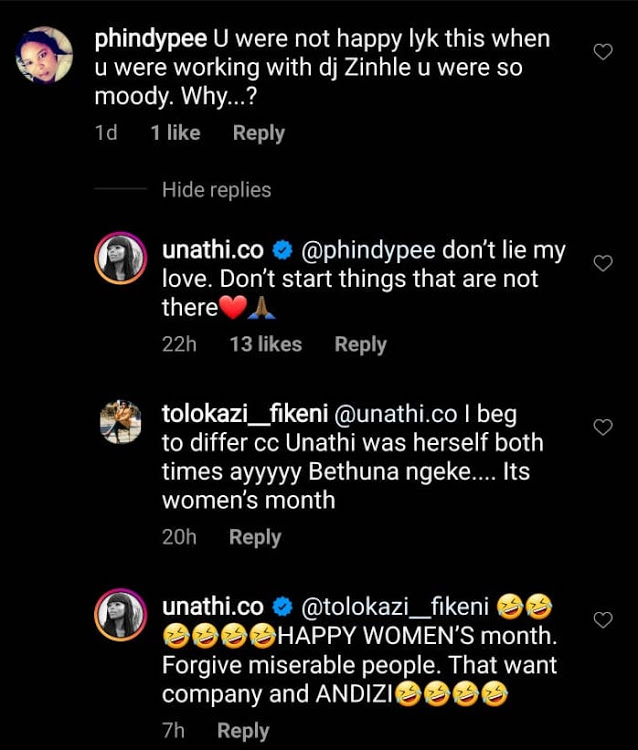 By the way, Unathi was one of the judges deeply impressed by the performance of the Idols SA contestant Vhudi. She praised his singing gift as well as his songwriting skills after he performed his song “My Yoki Yoki.”

His performance trended almost immediately. Nigerian singer Davido asked Vhudi to contact him. And even Tresor Riziki was asked (by fans) to release a collaborative tune with Vhudi. Read the story here.

Well, what do you think of the claim Unathi was moody when DJ Zinhle appeared as a guest judge, and Unathi’s response? You may want to join the conversation by dropping your thoughts in the comment section below.

Tags
DJ Zinhle Unathi
John Israel A Send an email 19 August 2020
Back to top button
Close
We use cookies on our website to give you the most relevant experience by remembering your preferences and repeat visits. By clicking “Accept All”, you consent to the use of ALL the cookies. However, you may visit "Cookie Settings" to provide a controlled consent.
Cookie SettingsAccept All
Manage Privacy