The graduation ceremony of the University of South Africa (UNISA) was interrupted yesterday, Tuesday, March 15, by the protesting members of the National  Education Health and Allied Workers Union (NEHAWU).

The ceremony was held at the ZK Mathews Hall when the NEHAWU protesters stormed the place. According to the aggrieved workers, the university had reneged on the salary adjustment agreements reached last September.

An emergency meeting was convened between UNISA”s vice-chancellor and workers represented by NEHAWU. The workers have threatened further disruptions of academic activities if the institution should continue to renege on its promise.

In a statement posted on its official website soon after, UNISA had apologized for the disruption, noting that UNISA is currently in a discussion with the workers union with a view to resolving the issue.

The statement also noted that the university will make alternative arrangements for students whose graduations were interrupted. The new arrangement will be communicated to the students in due course. Below is the statement from the institution. 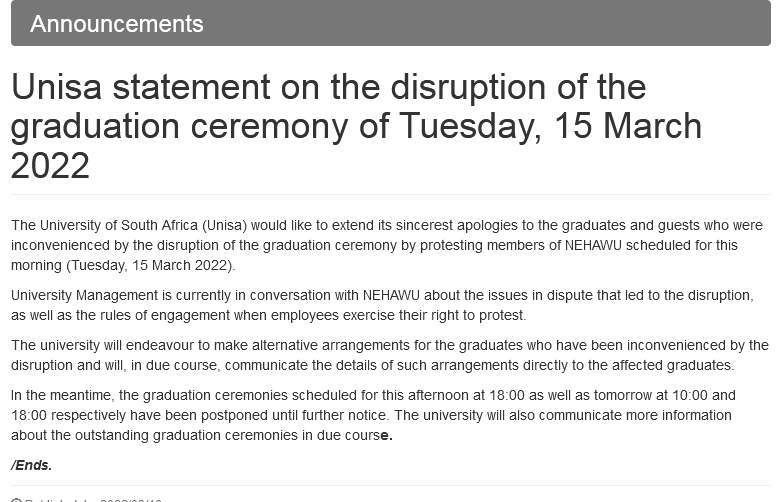 By the way, some social media users have used the NEHAWU protest as an avenue to bash foreigners in South Africa and accuse them of taking the jobs that should go to the local population.

Tags
UNISA
John Israel A16 March 2022
Back to top button
Close
We use cookies on our website to give you the most relevant experience by remembering your preferences and repeat visits. By clicking “Accept All”, you consent to the use of ALL the cookies. However, you may visit "Cookie Settings" to provide a controlled consent.
Cookie SettingsAccept All
Manage Privacy