Apparently Family Tree rapper Cassper Nyovest caught the #DuduzaneChallenge bug and joined in the challenging that has been entertaining South Africans for some time now.

Cassper Nyovest’s #DuduzaneChallenge video was unlike anything many have seen. It provoked massive hilarity when shared. In the video, an “obscure figure” (actually Alie keys) could be seen singing while two men who appear to be body guards escort him.

Not only were Casper Nyovest’s fans amused by the video, Mzansi celebs were as well. The result is a storm of the laughing emojis. You can check out of the the reactions below. 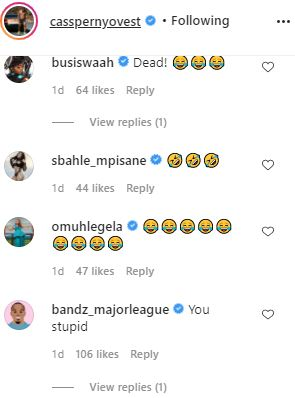 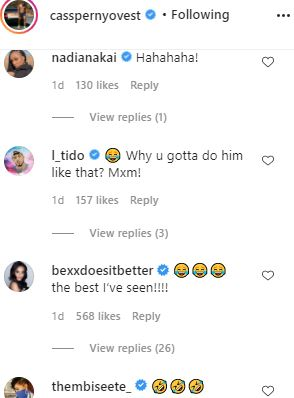 By the way, #DuduzaneChallenge was inspired by Jacob Zuma’s son for whom the challenge is named: Duduzane. He had been pictured strutting out of the office while Big Zulu’s song “Imali Eningi” played in the background.

Many celebs, including DJ Naves, DJ Fresh and DJ Tira, had done the challenge. But Cassper Nyovest’s was unique. Well, what do you think of the songster’s version of the challenge?

Tags
Cassper Nyovest
John Israel A Send an email 14 December 2020
Back to top button
Close
We use cookies on our website to give you the most relevant experience by remembering your preferences and repeat visits. By clicking “Accept All”, you consent to the use of ALL the cookies. However, you may visit "Cookie Settings" to provide a controlled consent.
Cookie SettingsAccept All
Manage Privacy