Celebrated kwaito artist Oskido received a plaque from YouTube after he reached a milestone of 100 thousand subscribers on the video streaming platform.

It’s been a long walk and Oskido is grateful for the journey so far. In a post to his verified Instagram page yesterday January 24, the songster had shared the plaque he received from YouTube.

In the caption to his post, he noted he’s getting there, however slow the journey might seem. He also noted he’s always grateful for the love from his fans – after all, if they didn’t subscribe to his channel, he wouldn’t reach the milestone.

He encouraged his fans to continue subscribing to his channel. In the comments, his fans, as well as fellow celebs, congratulated him on the milestone.

DJ Zinhle, who sees Oskido as family, was in the comments with the words, “Well done.” You can check out the video below. 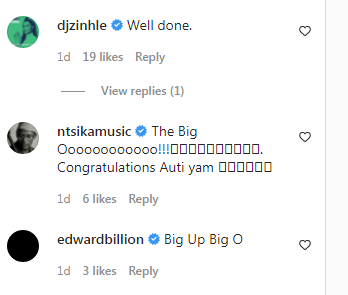 By the way, Oskido is one of the most respected voices in South African music. The Kalawa Jazmee Records has been in the industry for over a decade. He combines the world of deejaying and singing, and he’s been great at both.

Oskido will likely get an NFT when he reaches greater numbers.

Tags
Oskido
John Israel A Send an email 25 January 2022
Back to top button
Close
We use cookies on our website to give you the most relevant experience by remembering your preferences and repeat visits. By clicking “Accept All”, you consent to the use of ALL the cookies. However, you may visit "Cookie Settings" to provide a controlled consent.
Cookie SettingsAccept All
Manage Privacy