A prophet has sent a strong warning to the Ferguson Films boss Connie, urging her to pay close attention to god.

Prophet Aaron Xhali of the I Am ministries had issued the warning in a recent video posted on his Twitter timeline. You can check it out below.

Another Prophetic WARNING⚠️for Connie Ferguson to pay attention to God!!!

The reactions to the tweet were massive and swift. Some peeps were convinced that the prophet was only using the widow of the late Shona Ferguson to gain attention.

Another wondered if the supposed prophecy was not supposed to be between the prophet and the intended recipient, and why the said prophet should be broadcasting it for all to hear.

Some peeps urged the prophet to leave Connie alone because God himself would protect her. Others made it clear they would pray for her and she would be fine without the prophet having to intervene. 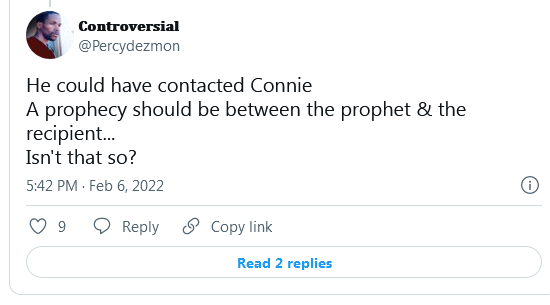 By the way, based on her social media posts since her husband’s sudden death last July, Connie has been drawing strength through God in prayer, as well as from her support system, which includes her two daughters.

By the way, previously, before her husband’s death, a Twitter user who fancies himself the Egyptian sun god Ra, had warned Connie about her husband’s imminent death. The tweets only surfaced after Shona died of coronavirus complications

Tags
Aaron Xhali Connie Ferguson
John Israel A Send an email 8 February 2022
Back to top button
Close
We use cookies on our website to give you the most relevant experience by remembering your preferences and repeat visits. By clicking “Accept All”, you consent to the use of ALL the cookies. However, you may visit "Cookie Settings" to provide a controlled consent.
Cookie SettingsAccept All
Manage Privacy