Kairo Forbes sure knows how to touch her father’s heart and in an adorable way, too, young though she may be.

This much was obvious yesterday Sunday 21 June 2020, which was recognized globally as Father’s Day – a day of celebration of fatherhood and paternal bonds.

Kairo Forbes, AKA’s daughter with DJ Zinhle, shared an Instagram post in which she said “cheers” ti him, as well as called him a favourite man in the world. The picture was taken by AKA’s mother, Lynn Forbes. 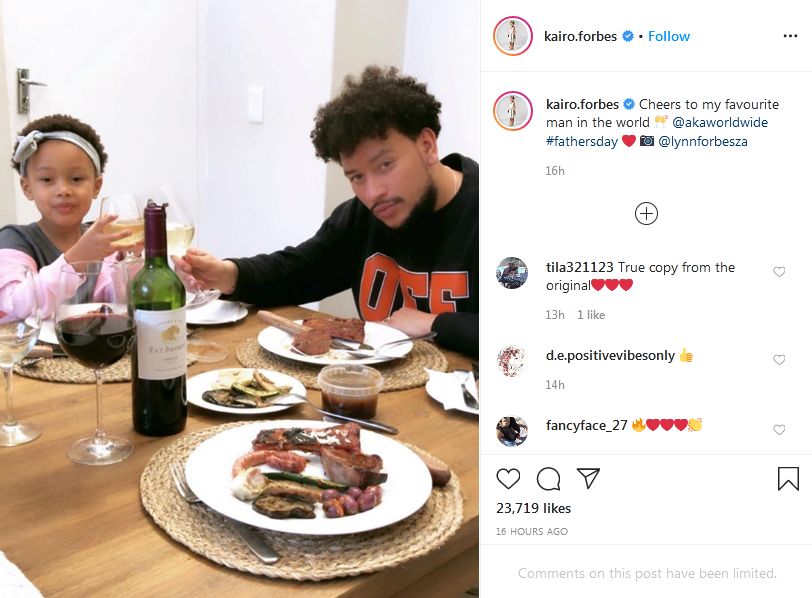 AKA himself shared a clip of the moment on his Twitter account, with a “Happy Father’s Day” caption that had fans in spasms of raptures. Well, it was a delightful scene that might leave some peeps emotional even years from now.

It is unknown if DJ Zinhle, with whom he had Kairo Forbes, sent him a happy Father’s Day note privately. The two are no longer an item after AKA flew into the arms of a new woman, leaving her alone for a second time, to the chagrin of fans who had warned her earlier not to take him back.

Anyway, AKA is still marching ahead, treating fans to sumptuous numbers, and it doesn’t look like he would stop anytime soon.

Tags
AKA Kairo Forbes
John Israel A22 June 2020
Back to top button
Close
We use cookies on our website to give you the most relevant experience by remembering your preferences and repeat visits. By clicking “Accept All”, you consent to the use of ALL the cookies. However, you may visit "Cookie Settings" to provide a controlled consent.
Cookie SettingsAccept All
Manage Privacy