It’s no longer news that Cassper Nyovest is gearing to release a new single dubbed “Put Your Hands Up.” But what should fans expect about the number?

Well, Cassper Nyovest has just given clues by sharing a behind-the-scenes clip of the making of the song. The clip opened with the songster speaking and then laughing. Then, it transitioned quickly into the studio, and fans get to see the muso at work doing what he loves best. You can check out the clip below.

“Put Your Hands Up” might not be out yet, but expectations are already high. Also, fans have been asking questions about the forthcoming song. One fan asked what type of music “Put Your Hands Up” it, and Cassper responded that it’s just good music that he should be making at his age.

He also noted that he’s getting into a new role and making music that he grew to love. His tweet follows. 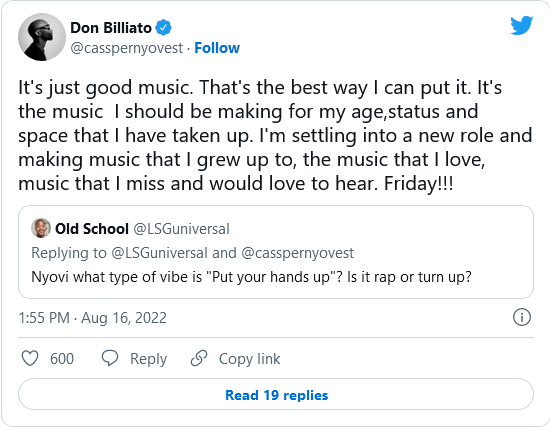 While Cassper is gearing to release new music, he’s also looking forward to a boxing match with rapper Priddy Ugly. The two are set to square off in the ring in the second version of Celebrity Boxing. Cassper had lost the first facing Naakmusiq.

Tags
Cassper Nyovest
John Israel A Send an email 18 August 2022
Back to top button
Close
We use cookies on our website to give you the most relevant experience by remembering your preferences and repeat visits. By clicking “Accept All”, you consent to the use of ALL the cookies. However, you may visit "Cookie Settings" to provide a controlled consent.
Cookie SettingsAccept All
Manage Privacy