Cassper Nyovest had a turning point days ago in Tanzania where he turned up for a concert. At the end of it all the “Any Minute Now (AMN)” rapper felt somewhat sad to be going back home, a place he described as not so nice.

But then Tanzania has seriously captured his interest, and the champ will be returning to the country. He gave no idea when, however.

In a recent Instagram post – actually a short clip of his performance in Tanzania – the songster had thanked those instrumental to putting the show together and for hosting him. It was a great way to start the New Year, according to him. 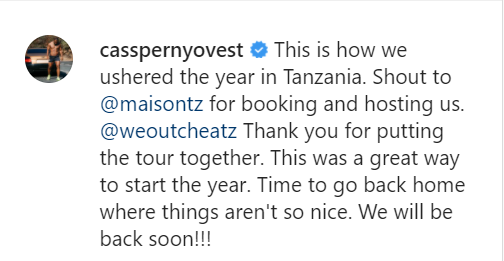 Maison, which had put the show together, also shared a clip of Cassper Nyovest’s performance, describing what transpired as madness – more like a movie – incredible.

Until that happens, fans have got to slake their thirst with the video of Cassper Nyovest’s performance in the East African country. What do you think of the videos?

Tags
Cassper Nyovest
John Israel A Send an email 6 January 2021
Back to top button
Close
We use cookies on our website to give you the most relevant experience by remembering your preferences and repeat visits. By clicking “Accept All”, you consent to the use of ALL the cookies. However, you may visit "Cookie Settings" to provide a controlled consent.
Cookie SettingsAccept All
Manage Privacy