Besides acting, Enhle Mbali has apparently got a singing gift. This much became obvious recently when she shared a clip of herself “remixing” a song – as she would say.

In the caption to the clip, she had wondered who else has got her habit of changing the lyrics of favourite songs. The clip, which popped online yesterday 7 January, has been viewed over 108k times. You can check it out below. 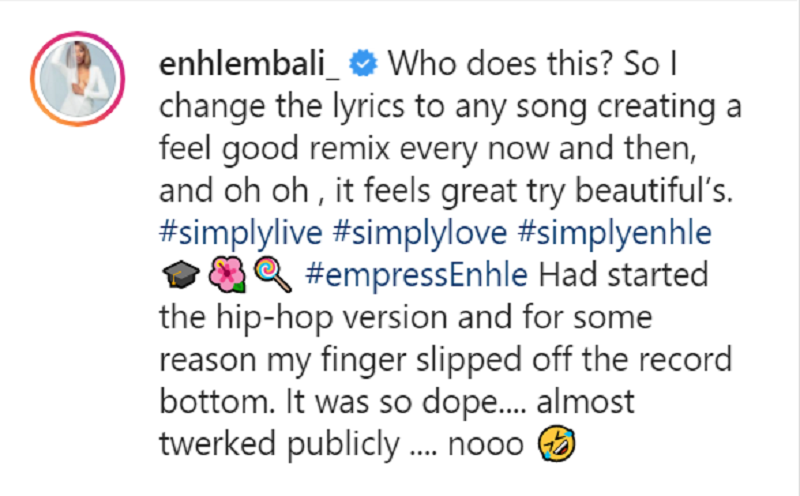 Enhle Mbali was once married to celebrated international disc jockey and producer Black Coffee. The marriage had collapsed amid allegations of cheating on Black Coffee’s part. It was an acrimonious divorce and the dust of it is yet to settle.

Enhle Mbali had admitted suffering from depression because of it all. She is apparently picking up the pieces of her life and doing the things that make her happy, one of which is changing the lyrics of songs for fee-good moments.

From the clip she shared, it’s obvious she had got a fine voice. Her fans who had watched the clip would say the same.

What do you think of Enhle Mabli’s “remix” clip? Do you think she’s got a singing gift? You might want to join the conversation by dropping your thoughts in the comment section.

Tags
Enhle Mbali
John Israel A8 January 2021
Back to top button
Close
We use cookies on our website to give you the most relevant experience by remembering your preferences and repeat visits. By clicking “Accept All”, you consent to the use of ALL the cookies. However, you may visit "Cookie Settings" to provide a controlled consent.
Cookie SettingsAccept All
Manage Privacy