Controversial songstress Kelly Khumalo has issued a warning to peeps out there not to get into the wrong relationship because of Valentine’s Day.

She had issued the warning a day to the day the world has marked for centuries as a time of love and loving. In her post, she had warned whoever cares to listen not to find himself in a relationshit because of Valentine’s Day.

Come on, that’s not a typo. She actually said that in her post. This provoked mass hilarity among her fans, who peppered the post with the laughing emoji. And for those who pester her for a relationship via DM, she has no time for them. 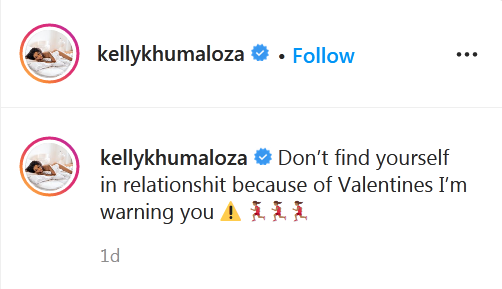 Well, the “Voice Of Africa” might be in a position to give this advice, after all, having been in a couple of “wrong relationships” previously.

Her relationship with “Ndikhokhele (Remake)” singer Jub Jub ended acrimoniously with her accusing him of assault and battery. She shared images of her battered face to drive home her claim.

Although her relationship with Chad Da Don didn’t end acrimoniously, she would claim in an interview that settling down with him would have been the worst decision of her life.

Well, what do you think of her Valentine’s Day advice? You may want to watch the video below.

A post shared by The Voice Of Africa (@kellykhumaloza)