Nota Baloyi pulled up on Sol Phenduka, and the internet is here for it.

Is it just us, or is there drama everywhere we turn this month? Nota Baloyi seems to be at war with virtually everyone on the entertainment scene, except maybe the people who help him make money or invite him to their podcast.

Over and over again, the music executive has commented on his reservations about on-Air personality Sol Phenduka who he has called a backstabber. Back when Sol scored for himself a sweet radio gig, Nota dragged him all over Twitter in a series of tweets claiming that he knew Sol could not be trusted.

While Mac G kept mum, Nota fought the supposed battle alone. Trust Sol not to swallow his shots and move on. The “Podcast And Chill” co-host has also talked about Baloyi on the show and managed to keep his distance from him.

You may have noticed Nota trending for the umpteenth time this month. The former rapper filmed himself confronting Sol Phenduka at an unknown location, and tweeps are not impressed by it. Sol can be heard telling him to leave him alone and stop using him for clout.

Of course, Nota retorted that he wasn’t chasing clout. It is fair to say they’ve both been talking about each other. When Nota told Sol to quit talking about him, he said he would and taunted him about his wife leaving him.

Sol can be heard telling Nota to come along so they can take it outside, while Nota replies that he would be raped in jail. Tweeps found that funny. Some pointed out that Nota has been talking about messing Sol up but could even take him up on his offer. Some also commented that Nota is unhinged and childish.

Check the video out below.

Nota pulls up on Sol 😂😂😂 pic.twitter.com/MldD5kZwJJ 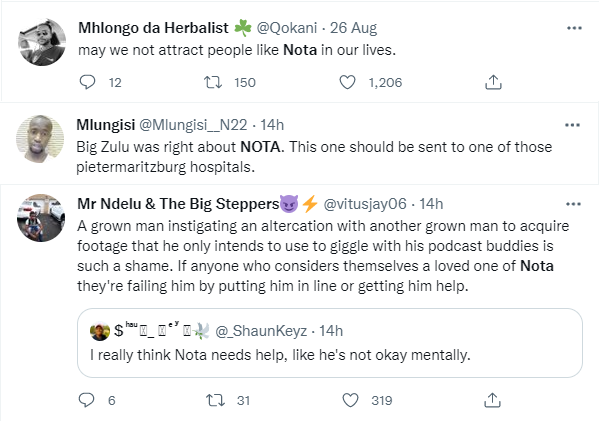 Tags
Nota Sol Phenduka
John Jabulani Send an email 31 August 2022
Back to top button
Close
We use cookies on our website to give you the most relevant experience by remembering your preferences and repeat visits. By clicking “Accept All”, you consent to the use of ALL the cookies. However, you may visit "Cookie Settings" to provide a controlled consent.
Cookie SettingsAccept All
Manage Privacy