Mlindo The Vocalist lists all that he’s done for Martin Mphelo aka The Good Guy so far.

So much can change in a minute, and we have seen that happen so many times. In case you didn’t know, a talented homeless singer, Martin Mphelo had his life changed by singer, Mlindo The Vocalist and Nyiko The Great.

After the “Yekela” singer tweeted a video of the homeless guy singing Anthony Hamilton’s “Prayer For Me”, Mzansi found him in what seemed like a split second. Thanks to the wonders of social media. After revealing that his life was about to change, Mlindo really did change it.

The talented singer has now revealed some of the things they have done for him so far. According to him, they have gotten him an apartment and a job, and also put him in the studio. So, we might be getting a new song from the talented muso soon. 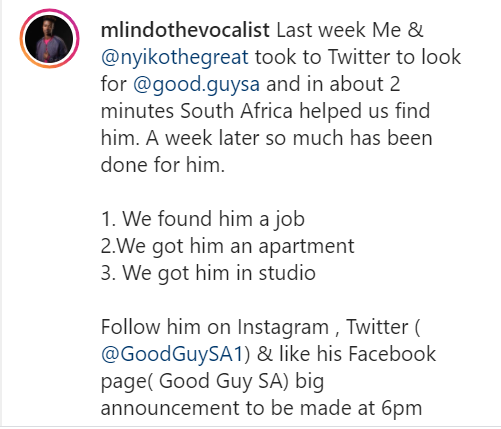