Since his battering in the ring by Cassper Nyovest, nothing has been heard of the controversial YouTuber Slik Talk, and South Africans are worried.

Slik Talk had insulted Cassper Nyovests in a series of posts and even left disparaging comments about his ex Amanda Du-Pont, which irked the Family Tree boss.

Cassper Nyovest had challenged Slik Talk to a boxing match, promising the YouTuber an R100k reward, win or lose. He’d also promised another R100k if Slik Talk should knock him out.

Well, as some spectators had said, Slik Talk got the beating of his life.

Where is Slik Talk? South Africans who have been starved of drama have been asking that question, urging him to come out and spice things up as usual. 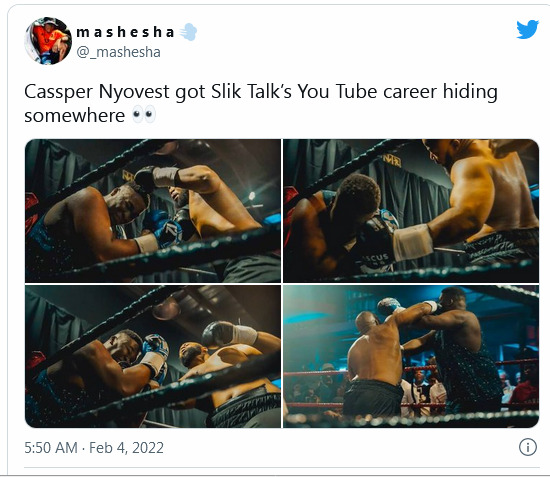 Cassper Nyovest even joined the call. In a tweet, he’d wondered why his adversary was now, joking that maybe Slik Talk was somewhere chilling with R100k because, well, “money changes people.”

Well, until Slik Talk shows up again, South Africans will continue to wonder where he is and ask for his return because, sporadically, the nation appears starved for drama.

Of course, we’ll bring you the news when Slik Talk shows up again.

Tags
Slik Talk
John Israel A Send an email 4 February 2022
Back to top button
Close
We use cookies on our website to give you the most relevant experience by remembering your preferences and repeat visits. By clicking “Accept All”, you consent to the use of ALL the cookies. However, you may visit "Cookie Settings" to provide a controlled consent.
Cookie SettingsAccept All
Manage Privacy