Social media arguments are becoming annoying and boring for Cassper Nyovest. So now, instead of insults via social media, he would want those disrespecting him to settle their difference in a boxing match with him.

The Family Tree boss is offering Slik Talk a sum of R100k for a boxing match. According to the “Doc Shebeleza” hitmaker, Win or lose, Slik Talk can keep the money. 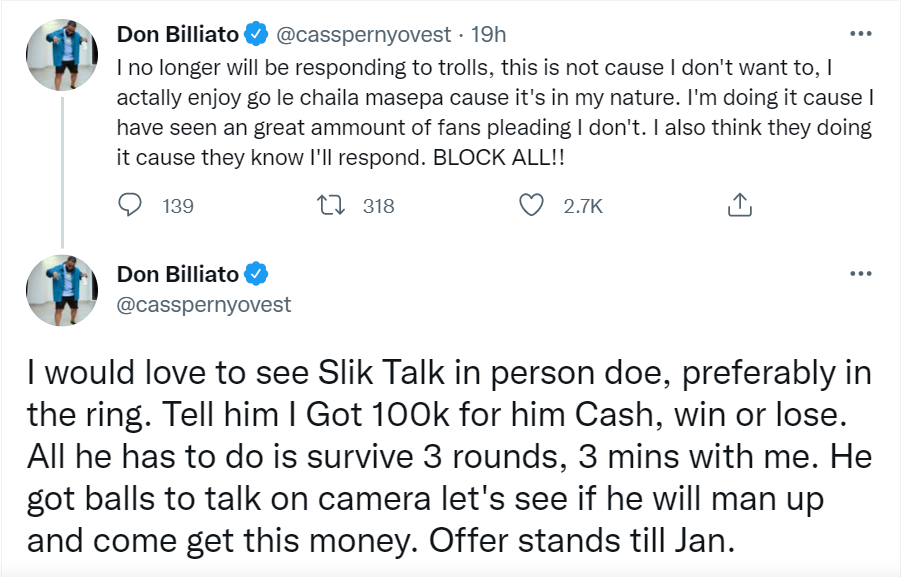 The crisis between the two began just recently after Slik Talk, a YouTuber, savaged the second season of The Braai Show, which Cassper is currently hosting.

As far as Slik is concerned, Cassper Nyovest is the worst show host he has listened to his entire life, and the second season of the show he’s hosting is a big fail compared to the show’s first season which was hosted by Cassper’s rival, AKA.

Slik’s verdict had irked Cassper Nyovest, so he’s challenging Slik to a boxing match and offering him R100k, whether he should win or lose.

The boxing match challenge would not surprise Cassper’s core fans, though. Cassper rarely fights anyone online these days. Instead, those who insult him immediately challenges him to a boxing match. So far, he’d challenged AKA Prince Kaybee and DJ Speedsta. But the fights never held.

Slik talk accepts the challenge and he is willing to take the 100k Rands and meet Cassper Nyovest in the ring for a boxing match. He is not just an internet troll at the end of the day, he is willing to face anyone who challenges him face-2-face.

Tags
Cassper Nyovest Slik Talk
John Israel A Send an email 22 November 2021
Back to top button
Close
We use cookies on our website to give you the most relevant experience by remembering your preferences and repeat visits. By clicking “Accept All”, you consent to the use of ALL the cookies. However, you may visit "Cookie Settings" to provide a controlled consent.
Cookie SettingsAccept All
Manage Privacy