What are the chances of Yanga Chief releasing a collaborative project with fellow rapper Kiernan “AKA” Forbes? That’s one question fans have always had in mind, and finally, they got the chance to ask it when the songster threw the doors open.

Yanga Chief had opened the floodgates of questions on Instagram when he posted that fans may “ask away….” And ask they did. One fan asked if the muso will ever release a collaborative project with AKA. The songster didn’t waste time with a response.

A laconic “fingers crossed” was his answer to the question. In other words, it may happen, and it may not happen – and he might not be the reason for it, either way. You can check out the post below. 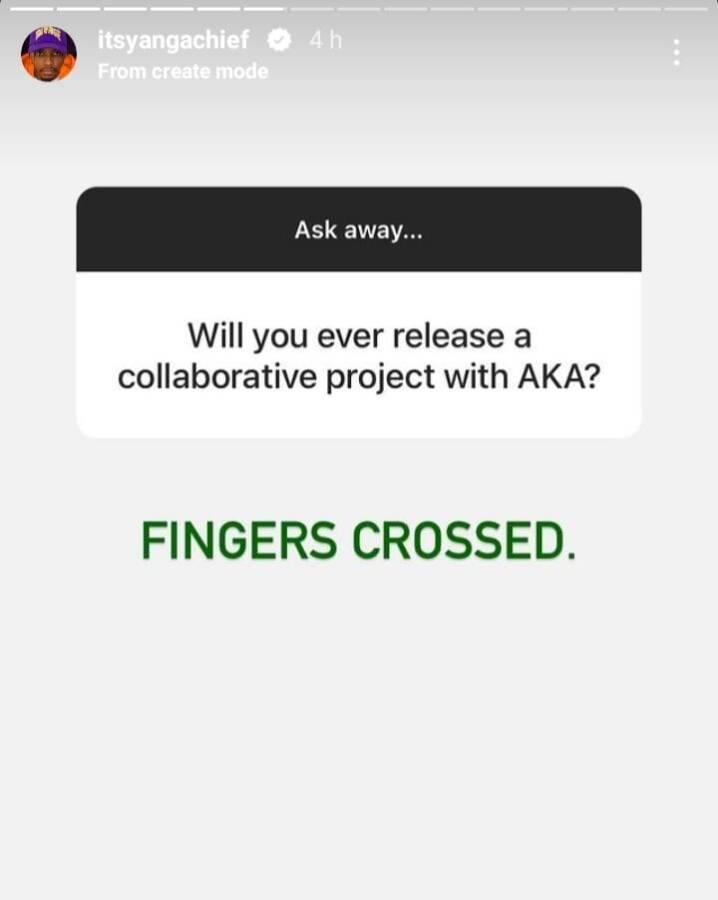 Yanga Chief recently released a documentary dubbed 16V in collaboration with Rich Mahogany. AKA had hailed the project and the collaborators’ contribution to it in a tweet which Yanga Chief acknowledged with a token of courtesy.

AKA’s tweet likely fanned the interest in seeing him collaborate with Yanga Chief. But then, as Yanga had said, fingers are crossed at the moment. Still, if they should collaborate, you can count on us to share the same with you.

Tags
Yanga Chief
John Israel A Send an email 6 October 2022
Back to top button
Close
We use cookies on our website to give you the most relevant experience by remembering your preferences and repeat visits. By clicking “Accept All”, you consent to the use of ALL the cookies. However, you may visit "Cookie Settings" to provide a controlled consent.
Cookie SettingsAccept All
Manage Privacy