The “Utatakho” muso made this known in a tweet days ago. In the tweet he had made it clear that he stands for Xhosa rap and that nothing can separate him from it. And no one can and should pick only him when it comes to Xhosa rap.

He also expressed his desire to follow a path all his own, without looking in the direction of those who had walked befoe him, creating paths along the way. 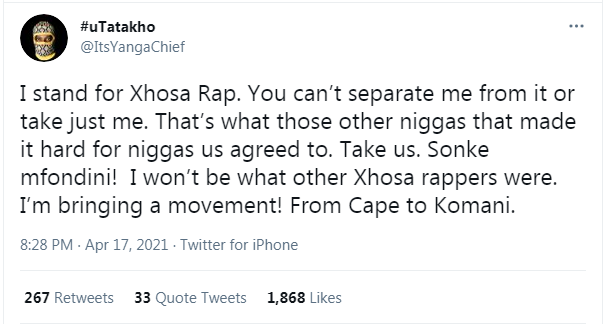 Some of his fans actually agreed with him. Others think iFani was the one who had paved the way for many Xhosa rappers but that, unfortunately, he has not been recognized for his efforts.

Well, in his desire to go his own way, leading others, one can’t fault Yanga Chief. The songster has earned his stripes and is justly respected in the industry.

What do you think of Yanga Chief’s take on Xhosa rap? You may want to join the conversation by dropping your thoughts in the comment section below.