Burna Boy compliments Nomcebo Zikode on her verse on the “Jerusalema” original saying “You really killed it”.

While many have cancelled Nigerian singer, Burna Boy for his feud with AKA based on accusations of xenophobia, others are busy rejoicing over the new “Jerusalema” remix. We can’t deny that it is just dope, and since its release, the song has gotten incredible reviews all over Africa.

Taking to social media, the song’s originally featured artist, Nomcebo Zikode revealed how thankful she is to be a part of the new remix. Her tweet prompted a reply from Burna Boy who revealed that he loved the original song and said she really killed her performance on the remix too.

An excited Nomcebo took to her Instagram page to share how humbled she was to receive such compliments from the Award-winning artist. In case you haven’t heard the new remix, you should check it out. 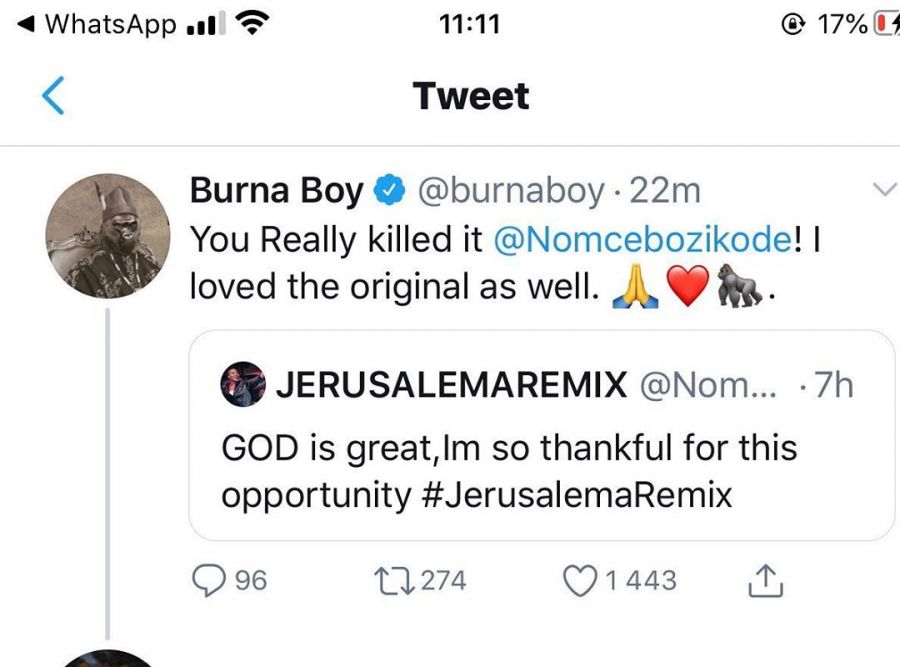 Tags
Burna Boy Nomcebo Zikode
John Jabulani Send an email 20 June 2020
Back to top button
Close
We use cookies on our website to give you the most relevant experience by remembering your preferences and repeat visits. By clicking “Accept All”, you consent to the use of ALL the cookies. However, you may visit "Cookie Settings" to provide a controlled consent.
Cookie SettingsAccept All
Manage Privacy